What started as a mishap with an old bow tie has turned into a successful startup business for two young Perth businessmen. 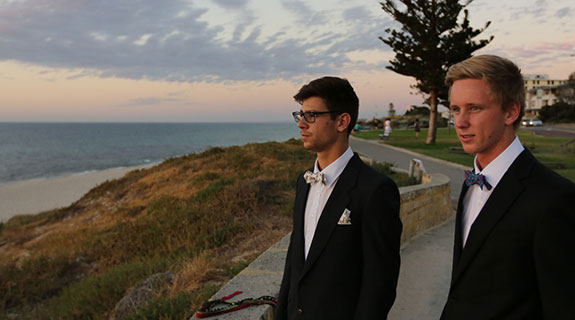 Tied up: Dan Robertson (left) and Sam Ewing are having success in their fashion enterprise.

What started as a mishap with an old bow tie has turned into a successful startup business for two young Perth businessmen.

Freelance Bow Ties co-founder Dan Robertson said that when his friend and business partner, Seb Ewing, needed a bow tie for an upcoming ball, he discovered his regular go-to necktie had fallen apart.

“He thought instead of buying a new one, he’d try to recreate it,” Mr Robertson said.

After a quick lesson from Mr Ewing’s sister, the pair had a crack at making their own, with great success.

Messrs Robertson and Ewing quickly became the preferred sartorial providers among their friends, and later to a wider network, and so started their business, Freelance Bow Ties.

The item is undergoing a revival among some parts of popular culture, with television figures such as Dr Who through to Chuck Bass from Gossip Girl adding a new twist to the old favourite, while hipsters are also putting it back on the map.

“The whole corporate lifestyle is very glamorous in the eyes of today’s youth.”

He claimed wearing a bow tie, and learning to tie it, was becoming a rite of passage.

The partners have expanded from the staple market of university student balls to set up their own online store, where bow ties sell for $50 a pop.

To achieve that growth, Freelance Bow Ties is seeking agreements with physical retailers, including in Claremont and Northbridge.

Mr Robertson contends that the product is a very competitive offering compared with more expensive offerings that are difficult to tie.

“Our price point, we’ve found its pretty good,” he said.

“We’ve found (our ties) have a lot more character than a standard option.”

The ties are hand-made, Mr Robertson said, and of very high quality.

They are also made in very limited lines, with specific prints only appearing in a small collection, which Mr Robertson said ensured buyers would have fairly unique items.