From the industrial development of Gladstone to the untouched wonder of Fraser Island, Queensland continues to amaze. 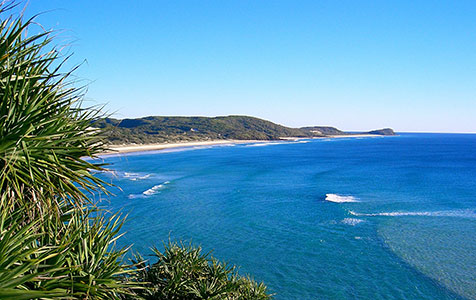 After three weeks on the Queensland coast I’m pleased to report we finally found a place that lived up to its reputation.

Fraser Island is the world’s largest sand island and was a great spot to visit, with beautiful forests and freshwater lakes, spectacular beaches and amazing wildlife. Most of all it was a fun adventure, belting around isolated sand tracks and along beaches in the 4WD.

The island was the highlight of an enjoyable week, which also featured two places that don’t normally rate highly on tourist agendas – Gladstone and Bundaberg.

Improved weather has certainly helped, but more of that later

My previous post was from the wet Whitsundays, and the rain followed us out of town as we drove south.

I have two memories from our stay in Mackay, which is one of several quite large but largely charmless regional cities we passed through. First was the frequency of the police sirens we heard through the night. Second was our drive past the Mackay ‘beachfront’ – we couldn’t actually see the water because the tide was out and there was constant drizzle, but what we did notice was the endless mud flats and the crocodile warning signs. Despite all that, one optimistic property developer was building apartments overlooking this ‘beach’.

The sunshine returned when we reached Gladstone, which may not appeal to many people but was of keen interest to the business journalist and wannabe construction engineer in me. It is home to an array of heavy industry and a huge amount of new investment.

It has alumina refineries, an aluminium smelter, fertiliser and explosive plants, Australia’s largest cement plant and a coal export terminal. A ferry tour of the expansive harbour offers a close-up view of all this, plus the big new developments. Three liquefied natural gas plants are under construction side-by-side on Curtis Island, and a new coal export facility is being built at Wiggins Island.

These projects are similar in scale to the big LNG plants and iron ore terminals in the Pilbara. They are engineering marvels, made all the more impressive by their remote setting.

Gladstone, like Karratha and Port Hedland, has experienced rapid growth on the back of these projects, with new apartments and civic projects springing up.

Next stop was Bundaberg, and a visit to the famous rum distillery. It’s not quite the same as visiting a whisky distillery in the Scottish highlands, but it was good fun.

The tour concluded with a visit to the bar and sampling a few different rums, which left everyone in good spirits.

Fraser Island was an awesome experience. Access to the island is via barges, which drop you off on the beach. There are no paved roads – driving is on sand tracks or on the beach, and it’s strictly 4WD only, giving it all a sense of adventure.

Most visitors stay on 75 Mile Beach on the eastern side of the island; it is very popular for fishing and had numerous bush camps. It also has a speed limit of 80km/h, though we found it very difficult to reach that speed. The beach is broken up by the waves and wind and tides, plus there are numerous streams running from the inland forests, and hazards that include the occasional aeroplane using it as a landing strip.

The island has amazing rainforests with huge trees and freshwater lakes. At times we were driving though the forests and felt like we were the only people on the island. The hilly, at times very steep, terrain added to the fun of driving along the sand tracks. They got the adrenalin pumping.

The wildlife includes purebred dingoes, which roam freely around the island. Just a few weeks ago a dingo attacked an adult walking alone at night, so the possibility of another dingo attack added to the experience. Some campsites are fenced off and one uses electric barriers where vehicles enter, but most people are relaxed about the dingoes and stick with bush camping, as we did. The dingoes are also relaxed about the passing parade of people, with one lying on the side of a busy sand track, forcing vehicles to detour around it.

There was plenty of other wildlife. We saw whales breaching just off the coast, some impressive lizards, eagles and butterflies, and even spotted an echidna by the side of the sandy track we were driving on.

The island has a few low-key resorts and permanent houses but they don’t intrude on the untouched atmosphere of the place. We were lucky enough to meet one retired mechanic who lives on the island – Fred fixed up a problem we’d been having with the hand brake, using gear in his backyard shed, and charged only $20. The same job at a city mechanic would have cost 10 times that amount. Like I said, it was a great place.

The final week in Queensland has been book-ended by a very enjoyable time in Noosa Heads, far too much rain and a strange Clive Palmer encounter.

I know it’s a bit boring to talk about the weather so much, but it looks like Queensland has received more than its fair share this past month.

And it’s not just occasional showers; I’m talking about unrelenting, unceasing, unbroken rain, with skies that are grey from one horizon to the next.

We had to be creative to deal with the terrible weather, which is how we ended up at the Palmer Coolum Resort. Like everything associated with Clive Palmer, it was a bizarre experience. At first glance, it’s a standard high-end golf course resort. But at second and third glance, it’s really odd, just like its owner.

Palmer bought the former Hyatt Coolum Resort three years ago and since then has set out to revive its fortunes. He seems to be going about it in a strange way. He has reportedly cut staff numbers from 650 to 90 since taking over. And the resort has lost the rights to host the Coolum Classic golf tournament. But it does have a dinosaur park, which was established last year at considerable expense.

The Palmersaurus – yes, that’s what it’s really called – has dozens of life-size robotic dinosaurs that move and roar, most notably a giant T-Rex right next to the first tee. If it was meant to bring in the crowds, it’s not doing a good job. The resort also has the Palmer Motorama, which houses Palmer’s collection of vintage and classic cars, including a Rolls Royce that still has personalised ‘Clive’ rego plates.

The theme continues in the hotel lobby, where photos of the winners of the Coolum Classic are interspersed with pictures of Palmer, with his wife and son, and various luminaries including Bill Clinton, Al Gore and Prince Phillip. The lobby has photos of several contract signings with one-time Chinese business partners, when Palmer still liked the Chinese.

It also has a collection of Clive Palmer cartoons, with the original artwork framed alongside the newspaper clippings. He must enjoy the cartoons depicting him as an obese dinosaur.

But the most bizarre thing about the Palmer Coolum Resort was the eerie lack of visitors or guests. I spent about 15 minutes wandering around the hotel lobby, and did not see anybody else except two staff at the check-in desk, who evidently had very little to do. One thing we did notice was the accumulated dust on the table settings in the hotel restaurant. We spent nearly an hour in the Motorama and saw only one other couple. And while it was a rainy day, the golf course was close to empty. The car park had at least 100 bays, but only half a dozen vehicles.

Earlier in the week, we had one really good day at Noosa Heads before the rain set in. Noosa was at its best, with the north-facing main beach bathed in sunshine while the headland behind the beach blocked the brisk southerly breeze. The best spot to enjoy Noosa was upstairs at the surf club, which has a large balcony restaurant overlooking the beach. It’s a bit like the cafes overlooking North Cott, but much better – nicer views, more space, better service. There are lots of healthy things to do at Noosa, like swimming or surfing or walking though the national park or along the river, but the surf club balcony was hard to beat.

The Sunshine Coast hinterland has some great spots, including the towns of Maleny and Montville. We visited them on a rainy afternoon, checking out galleries and cafes and bookshops. Well worth a visit.

On indulgence I visited to the Buderim Ginger Factory, which was strangely entertaining. We had a very enthusiastic tour guide who has found ways to include ginger in every dish or drink she prepares.

But our main activity during three days of non-stop rain was relaxing with a good book. I returned to one of my favourite authors, finishing Graham Greene’s Brighton Rock, and started a Steve Jobs biography that has been on my must-read list.

Next stop Byron Bay and NSW.