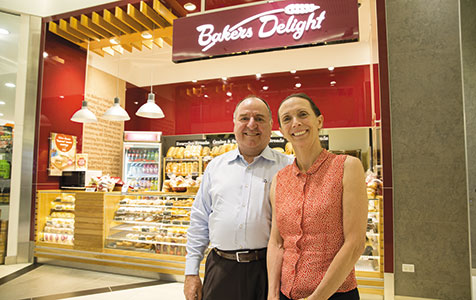 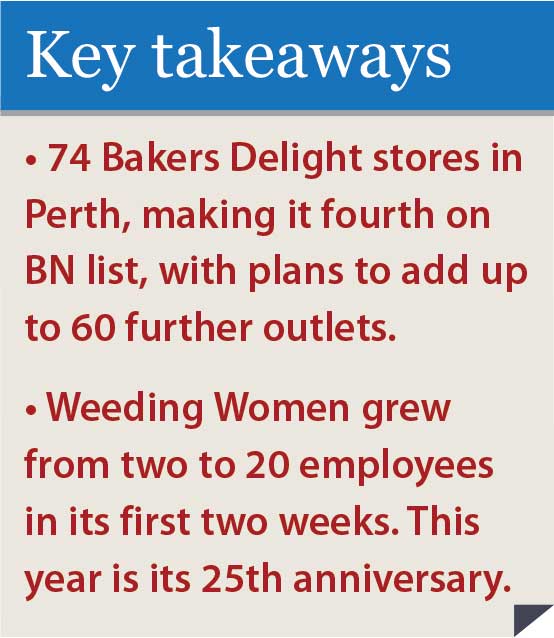 Weeding Women this year celebrates its 25th anniversary, and is seeking to mark the milestone by opening 12 new franchises.

Colleen Sheehan started the business when it became apparent regular gardeners were rare in Perth.

She launched the business just as the interest in home improvement and gardening was taking off in Australia, on the back of television series Burke’s Backyard, which was a real industry changer when it hit the airwaves in 1987.

With a catchy name and great interest from media, Weeding Women grew from two to 20 employees in its first fortnight.

“Our values haven’t changed one bit from 1989, and yet the funny thing is the world has changed dramatically,” Ms Sheehan told Business News.

Weeding Women now has four franchises and employs 42 people in the state.

She said those interested in a franchise opportunity would need to know what they were good at, and develop a team around them.

Bakers Delight co-founder Roger Gillespie said the company, which is celebrating its 20th year in Perth, had remained committed to constant improvement and building strong relationships that benefitted all stakeholders.

After opening its first store in Hawthorn, Victoria, with his wife and co-founder, Leslie, 34 years ago, Bakers Delight now operates 600 locations nationwide and has subsidiaries in New Zealand and Canada.

In the BNiQ franchises list, Bakers Delight ranks fourth, with more than 70 locations in Western Australia.

Annual bread sales across the WA bakeries are around $65 million, with year-on-year revenue growth of almost 5 per cent.

Strong population growth and the development of major retail centres led the company to plan up to a dozen more stores in WA per year for the next five years.

“We think there’s an opportunity for people who are moving out of mining … if we can get some of those people who’ve had enough of flying up and flying back … we’ll build a bakery for them,” Mr Gillespie told Business News.

Opening a new bakery would cost up to $500,000 for potential franchisees, including the building of the shop and three to six months of training in the art of baking.

“We’ve got some opportunities for 12 new sites … so we’re on the lookout for great people to open up those sites,” Ms Gillespie said.

The Bakers Delight owners said it was important new staff were trained to the highest level, and were well versed in the culture of the company.

Mr Gillespie maintains one of the reasons for Bakers Delight’s success was the training process undertaken by new bakers.

He said job satisfaction was a key inducement for people interested in becoming franchisees.

“It’s very satisfying to pull beautiful bread out of the oven and delight every customer every day,” Mr Gillespie said.

“And if you do that, you have a pretty good life and a satisfying life.

“You come in the morning, and all you’ve got is a pile of ingredients, and empty shelves and an empty till … and then you come back later in the day and the bread’s gone and the money’s in the till.

“We love turning people who know nothing about business into successful business operators.”

“There are not many jobs in town … where you can get instant job satisfaction the way we do,” she said.

“This is a job where the gym pays you.”

Ms Sheehan added that having the courage to back yourself was another important factor in starting a business, and making a success of it.

“Fortune favours the brave. You have to take risks,” she said.

“If you can have somebody that is prepared to take measured risks with you, there’s huge reward in being brave.”