Arguments built on pseudo-science and please to emotion will always fall short in the face of facts. 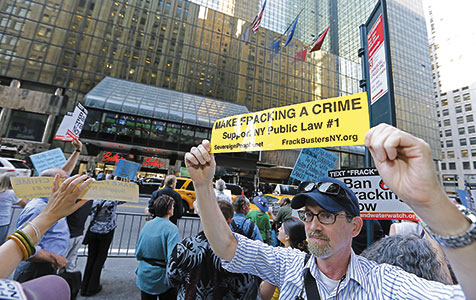 GAS FIGHT: Australian CSG proponents are not alone in having to deal with a vocal minority of opponents.

The anti-fracking brigade loves to dress up myths and fallacies and pretend it is science.

While the oil and gas industry is not exactly a nominee for sainthood, its opponents look increasingly like the bad guys when it comes to distorting the truth around the development of unconventional gas resources through the use of hydraulic fracturing.

This phenomenon is global and, like any fable used to scare children around the family hearth in a bygone age, it grows bigger and scarier as it travels further from its source.

I was appalled to hear on ABC radio a gentleman from the Mid West region of Greenough, talking about how he and others had decided to establish a movement to make the area ‘gasfield free’ after watching a DVD.

I’m not aware of the content of the DVD but there are several doing the rounds, including a so-called documentary called ‘Gasland’, which is simply propaganda against fracking.

Most cite pseudo-science to state their case; some have gone further.

All credit to the Australian Financial Review for highlighting some of this nonsense in a recent report on anti-fracking myths, some of which were dishonest, many others of which were simply borne of ignorance.

Take this example the AFR highlighted about an online petition on to shut down a project called Ironbark in Queensland because of a “toxic black rain”.

“In fact, the black rain was naturally occurring waste from jumping plant lice or ‘lerps’ that gorge on eucalyptus sap, an Origin-funded study found,” the AFR reported.

The report said that 26,326 people had signed the petition, which blames soil and water contamination, nausea, irritation and “lack of . . . energy” on “the mystery substance”.

This is the kind of rubbish some people in Greenough have signed up to.

Then again the people of Greenough, or a vocal anti-development minority at least, are not afraid to stretch a few truths themselves.

Take this bit of scientific work, for example. According to Frack Free Geraldton spokesperson Jo Franklin, 96 per cent of people in central Greenough back calls for the area to be gasfield free. Signs on the anti-fracking website go further, stating its 96.2 per cent.

So here’s how they came up with the number.

“We knocked on every door in Central Greenough to ask the residents if they would like to declare their road gasfield free. The result was an overwhelming ‘yes’ with more than 96 per cent of people saying they

I wonder how the Australian Bureau of Statistics would do this? Or even a proper survey firm? I’ve been past central Greenough and checked it out on Google Earth, and am not sure there are enough people to get a precise figure like 96 per cent.

Yet Conservation Council takes this ‘survey’ figure and pushes it out on social media, like it is real.

A political doorknock gets turned into a nice, scientific sounding number, not to rounded, not dividable by five or 10. This is an anti-development tactic – sound scientific until the science catches up – by which time developers have exhausted their funds, given up and gone home.

Well how about this for a proper scientific number? In a pilot study the CSIRO, a real scientific body, looked at the frequently cited allegation that post-fracking methane leakage from gas extraction is not only a problem, but also negates the advantage gas has over coal when it comes to reducing emissions that are the culprits in the climate change debate.

According to the CSIRO, methane is a very powerful greenhouse gas and, therefore, fugitive emissions of from gas production and processing have the potential

to diminish the greenhouse benefits of natural gas compared with other fossil fuels.

“To provide quantitative information on emissions from coal seam gas (CSG) operations, CSIRO and the federal Department of the Environment initiated a project to measure emissions from a range of production wells in Queensland and New South Wales,” the CSIRO says on its website.

“We measured emissions at 43 CSG wells – 37 in Queensland and six in New South Wales. Some key findings were as follows: of the 43 wells examined, only three showed no emissions.

“The remainder had some level of emission, but generally the emission rates were very low, especially when compared to the volume of gas produced from the wells.

“Although low levels of fugitive emissions were detected from most of the wells studied, no emissions were found to emanate from the well casing. Many of the leaks detected were preventable and easily fixed.

emissions rate for this study equated to approximately 0.02 per cent of the total gas produced.

“Although this is a very low figure, it’s important to note that this is only a pilot study, encompassing less than 1 per cent of the existing CSG wells in Australia. Another important consideration is that emissions were only measured from well pads, so cannot give a full representation of the whole-of-life emissions.”