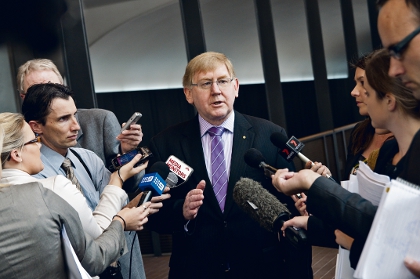 The resignations of senior members of the Labor cabinet came as Kevin Rudd announced he will no longer seek the leadership of the Labor Party.

They became the latest ministers to resign, joining Tertiary Education Minister Chris Bowen in stepping down.

Simon Crean was sacked yesterday after initiating the failed spill.

Mr Ferguson and Mr Carr, both Kevin Rudd supporters, called for the party to unite after yesterday’s extraordinary caucus meeting which saw Prime Minister Gillard hold onto the leadership unopposed.

Mr Ferguson said it was a personal decision to step down.

He called on Labor to regain the respect of all Australians and reclaim the legacy of the Hawke and Keating governments.

"It is the right and honorable decision, I maintain my dignity and sense of decency," Mr Ferguson said.

Mr Ferguson told reporters in Canberra he would have supported Kevin Rudd and Simon Crean yesterday, had he been present for the vote.

"For those reasons I would have voted for Kevin Rudd yesterday and Simon Crean to try and give this party a fresh start," he said.

"Unfortunately the events of yesterday were not what we have hoped for.

"The caucus has made its decision. I respect that decision."

Mr Ferguson has held the position of Resources Minister since 2007.

Mr Ferguson said he believed Labor had been doing a good job until the introduction of its mining tax.

"When you look at the way we handled the global financial crisis, Australians didn't appreciate there was a worldwide recession," he said.

"Things were going well then we got ourselves derailed by the mining tax dispute.

Shortly after Mr Ferguson addressed reporters, Human Services Minisiter Kim Carr held his own conference to announce his resignation, saying he had not taken the decision lightly.

"I will forever be grateful to the Labor Party for the opportunity to serve as a minister in a Labor government," Mr Carr said.

"It is working with people who deeply care about the future of this country that has made my time as a minister so rewarding."

Mr Carr said he took the view that this week was the party's last opportunity to install Mr Rudd as leader.

He said the spill numbers were close, but the Labor caucus felt it would be in the party's best interest that Mr Rudd would not stand.

"We have no option but to defend the caucus decision and work for re-election of the government under the current circumstances," he said.