Fortescue Metals Group chairman Andrew Forrest has outlined an ambitious plan under which renewable energy will rank alongside the company's core mining business. 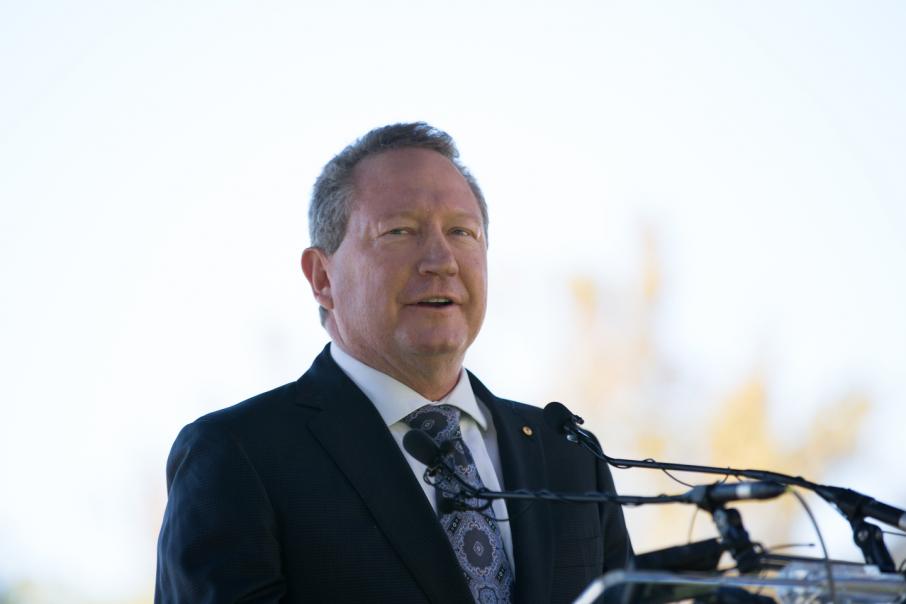 Fortescue Metals Group chairman Andrew Forrest has outlined an ambitious plan under which renewable energy will rank alongside the company's core mining business.

The company has committed to spend $1 billion on decarbonisation and hydrogen R&D over the next three years.

Fortescue is targeting 235 gigawatts of renewable energy capacity, with an initial target of 100 gigawatts.

For context, the International Energy Agency recently reported that new additions of renewable power capacity worldwide would increase to a record level of almost 200 gigawatts this year.

"We have identified resources which in gigawatt terms would place us up there with the major energy companies in the world if we fully developed them," he said.

Mr Forrest addressed the meeting from Paraguay, which he is visiting as part of a global tour of prospective development locations.

He told the meeting there was plenty of potential in renewables.

“After scientific and personal analysis of the renewable energy resources of our little planet, I can assure you that there is more than enough renewable energy to sustainably and economically supply every person on this planet, from this time forth,” he said.

Mr Forrest said his team has closely studied 47 countries, based on the interest and capability of their governments and their renewable energy sources.

They have visited 23 and plans to visit the remaining 24.

Today’s presentation comes after Fortescue announced in September it had reached “deeds of agreement” with the governments of Papua New Guinea, Indonesia and Afghanistan.

In each case, Fortescue said it would undertake studies for the development of hydropower and geothermal projects for green industries.

The planned developments will be undertaken through a wholly-owned subsidiary, Fortescue Future Industries.

Mr Forrest said individual projects would be developed by FFI with ownership and project finance to be separately secured without recourse to Fortescue.

While Mr Forrest’s plan is very ambitious, he has the track record and financial capacity to make it real.

In the space of 15 years, Fortescue has gone from a standing start to being one of the world’s largest iron ore producers, with the company now ranked among Australia’s top 10 ASX stocks.

Mr Forrest has a personal fortune in excess of $23 billion and has pledged hundreds of millions to his philanthropic group Minderoo Foundation.

He noted today that Fortescue has a strong balance with low production costs and its entire supply chain has been financed, built and operated.

He said he was planning to repeat this track record for renewable energy and green industries.

He highlighted green hydrogen as critical to reducing emissions globally.

This could include the use hydrogen/ammonia fuel cells in shipping, the production of ammonia from green hydrogen, and switching steel making and industrial heating to a hydrogen-fuelled process.

In August, Fortescue signed an MOU with Hyundai Motor Company and the Commonwealth Scientific and Industrial Research Organisation (CSIRO) to accelerate the development of renewable hydrogen technology.