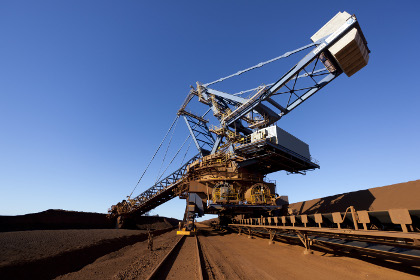 Shares in Fortescue Metals Group hit a three-year low today, despite the iron ore miner offloading the power station at its Solomon mine in the Pilbara for $US300 million ($A294 million).

The iron ore miner had been negotiating the sale for some time.

A volume of nearly 70 million Fortescue shares have changed hands - the highest on the Australian Securities Exchange.

The power station sale comes one day after the company announced the deferral of some expansion work and other cost cutting measures in response to significant falls in the iron ore price.

Fortescue said it would sell the power station to a subsidiary of TransAlta Corporation, a Canadian power company.

As part of the deal, Fortescue has entered into a long-term agreement to purchase power from the station over the life of its Solomon mine.

It was always our intention to divest the Solomon power station to an established owner and operator of power generation assets," Fortescue chief executive Nev Power said in a statement.

"We are pleased to establish a long-term agreement with TransAlta, a company with more than 15 years of experience operating power stations and transmission and distribution systems to mining operations in WA."

The sale remains subject to regulatory approvals, including the Foreign Investment Review Board, but Fortescue says it expects the deal to be completed by the end of September.

Meanwhile, ratings agency Fitch has downgraded its outlook for Fortescue to negative from stable.

Fitch said the negative outlook reflected the increasing pressure on the miner's liquidity and debt covenants that it was facing following steep falls in iron ore prices.

"The peak debt requirements of the company's large debt-funded capacity expansion is coinciding with a rapid and continuing decline in iron ore prices," it said.

"The current outlook is negative.

"As a result, Fitch's sensitivities do not currently anticipate developments with a material likelihood, individually or collectively, of leading to a rating upgrade."

Fitch said that while Fortescue's plans to defer part of its plan to triple production to about 155 million tonnes a year should alleviate some of the liquidity and covenant pressure in 2013, the ability to satisfy its covenants depended on iron ore prices recovering to about $US110 ($A108) a tonne.