UPDATE: Fortescue Metals Group has vehemently denied claims from a native title group that it is operating unlawfully with regards to Aboriginal heritage at one of its Pilbara mines. 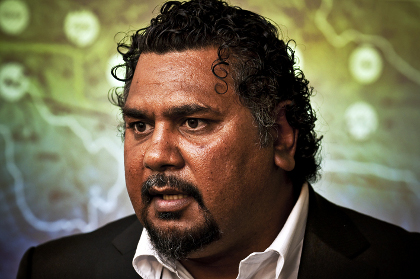 TOUGH TALK: Michael Woodley says he will attempt to address FMG shareholders tomorrow to alert them of the destruction of the culturally significant sites.

Fortescue Metals Group has vehemently denied claims from a native title group that it is operating unlawfully with regards to Aboriginal heritage at one of its Pilbara mines.

The Yindjibarndi Aboriginal Corporation has lodged a submission with Federal Environment Minister Tony Burke, in an attempt to halt Fortescue from developing the Firetail deposit at the Solomon Hub, on the basis of unlawful heritage dealings and “massive damage” to culturally significant sites.

The claims are the latest in a three-year battle between YAC and Fortescue over the Firetail deposit.

YAC chief executive Michael Woodley said the group had evidence that Fortescue had destroyed several Yindjibarndi sacred sites and ‘living heritage areas’ at Firetail, and was developing the area without an agreement from the site’s traditional owners.

And in more explosive claims, Mr Woodley said the YAC had received evidence that showed Fortescue forced heritage consultants to edit a report regarding the area’s cultural and historical significance by threatening to withhold payments.

Archaeological services firms Eureka and Veritas, which conducted the heritage study, said in an email to the Department of Indigenous Affairs that it had been requested to edit its report on the site, including the deletion of an entire section devoted to ethnographic context.

“At first we refused to comply,” the email from Eureka archaeologist Sue Singleton said.

“However, it soon became very clear that, if we did not comply, FMG would withhold payment of our previous, outstanding and well overdue invoices on the basis that FMG could not be expected to pay for a report that they could not use.

“At the time there were a number of invoices that were already overdue for payment, amounting, in Eureka’s case, to $70,000.”

The email also said that an anthropologist commissioned by Fortescue to assess the ethnographic significance of the area had spoken only to a ‘breakaway’ group of Yindjibarni people and did not take into account evidence given to the National Native Title Tribunal considering the religious significance of the sites.

“The study area is a rare find … and it has not yet been the subject of any substantive ethnograpohic survey, nor has it been the subject of a comprehensive archaeological report which takes into account all the information we compiled from our work in the area and which needs to be assessed as a whole,” Ms Singleton’s email said.

Fortescue said any claim that the company forced heritage consultants to change their report was “spurious and mischievous.”

“Fortescue requested the correction of unqualified commentary in the report in question,” the company said in a statement.

“Both the original and corrected versions of the report were submitted to the Department of Indigenous Affairs.

“The DIA was aware of both versions of the report at all times and process has not been subverted.”

The sites include an ochre quarry and an ancient creek bed where the Yindjibarndi people had collected stones for initiation ceremonies for hundreds of years.

Mr Woodley said there were approximately 270 significant sites near the Firetail deposit that had not been cleared for development under the WA Aboriginal Heritage Act.

“They were clearly advised by the Minister that they should conduct heritage surveys with YAC but have failed to do so.

“Instead they have given misleading reports designed to confuse the regulatory process and to dismiss the religious, cultural and historic importance of our sacred sites in the Firetail lease.”

Fortescue categorically dennied that it had damaged any sacred sites, saying that Mr Woodley's claim was part of an ongoing campaign by a man who no longer had the support of the majority of the Yindjibarndi community.

“We have spent many millions of dollars to protect and avoid significant Aboriginal heritage sites at the Solomon Hub and will continue to do so,” FMG director of development Peter Meurs said.

Mr Meurs said the company took the allegations very seriously and would co-operate fully with any potential investigation instigated by the Federal Environment Minister.

FMG has an agreement with what Mr Woodley calls the ‘breakaway group’, the Wirlu-Murra Yindjibarndi Aboriginal Corporation, to mine the Solomon project area, which is located around 200 kilometres south of Roeburne.

According to Fortescue, the Wirlu-Murra YAC group outnumbers Mr Woodley’s supporters by two-to-one.

The Wirlu-Murra group has initiated legal proceedings in the Federal Court to remove Mr Woodley as an applicant to the Yinjibarndi Native Title Claim, Fortescue said.

Also, the Federal Court in Perth dismissed an appeal by YAC in August over three mining leases at the Solomon Hub, including the Firetail deposit.

Mr Woodley said he would seek leave to address FMG’s annual general meeting of shareholders tomorrow, to present evidence of FMG’s conduct and request the company’s board be held to account.

“We don’t mind discussing and moving forward on this project, but they need to consult with the right people.

“But we are never going to sign an agreement this bad.”