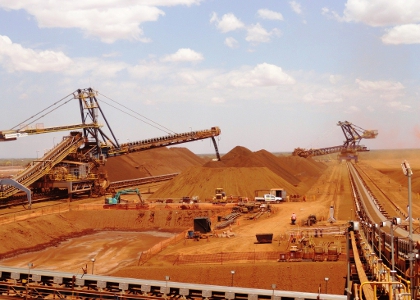 The stacker, reclaimer and conveyer system at Fortescue's Christmas Creek mine in the Pilbara.

Iron ore miner Fortescue Metals Group has reported a solid rise in half-year profit today but also disclosed an expected jump in costs and delays to its ambitious expansion strategy in the Pilbara.

Its net profit was up by a much stronger 155 per cent to US$801 million though that increase was inflated by a large accounting write-down in the prior half-year related to refinancing costs.

Chief executive Nev Power described the results as the “foundations of a watershed year” for the group, as it pursues rapid expansion.

However, the company said accomodation limitations within Port Hedland - which stem from several exporters pursuing simultaneous expansion projects - have become more severe and resulted in a requirement for an additional investment in housing.

The restricted accomodation together with remedial works from cyclone Heidi has moved the scheduled completion of a fourth shipping berth back from the December 2012 quarter to the March 2013 quarter.

The cost of this change plus the accomodation investment is estimated to be US$200 million, which the company is hoping to absorb within project contingencies.

The impact of cyclone Heidi has also seen the company lower its production guidance for the three months to end-March from 13.75Mt to a range of 13Mt to 13.5Mt.

The cyclone in early January forced the closure of Port Hedland harbour and dumped over 400 millimetres of rain across Fortescue's mining areas, the company said.

“Heidi caused some damage and disruption right across our mine operations and construction sites,” Mr Power said in a conference call.

“Having said that, we are confident of fully recovering to our guidance of 55Mt for the full-year in the June quarter.”

Morningstar analyst Mathew Hodge said the result looked weaker than expected on first impression. The firm had forecasted Fortescue to deliver net profits of $US983 million.

“Revenue was nearly US$200 million below forecast, accounting for the majority of the difference,” Mr Hodge said.

“Expenses – excluding depreciation and amortisation – were also about US$120 million greater than anticipated.

“This result, coupled with a downgrade in forecast third quarter production means our full-year 2012 net-profit after-tax forecast is likely to decline.”

Meanwhile, Mr Power predicted iron ore prices to remain at about the US$140 per tonne mark and to be reasonably consistent in that range.

“There was some volatility in the October to December period but since then the price has settled down and the market has maintained around the US$140 per tonne level,” he said.

“Short to medium term we don’t see any supply coming in to the market to change those prices.”