Fortescue Metals Group has extended its partnership with hockey world champions the Kookaburras for another two years, providing support in the build-up to the 2016 Olympic Games in Rio de Janeiro. 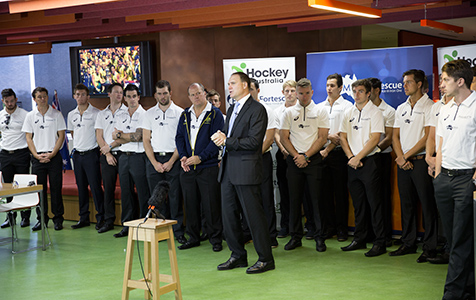 Fortescue Metals Group has extended its partnership with hockey world champions the Kookaburras for another two years, providing support in the build-up to the 2016 Olympic Games in Rio de Janeiro.

It is understood the deal is worth significantly more than previous 2012 arrangement, which was estimated to be more than $250,000 per year.

Mining services group Ausdrill sponsors the national women's team, the Hockeyroos, which is also based in Perth at Curtin University like its male counterpart.

“We want to be a part of Fortescue’s success as well and that for me is how it’s gone from a sponsorship and branding to a recognition of the real engagement that we do,” Mr Vale said.

“Through this partnership ... we have one of the great national sporting teams that there is. There are very few teams that can compare. You think about the All Blacks in rugby and you think about the Dream Team in US basketball and what the guys did this year at the World Cup ranks as highly as what any of those teams have possibly done and it is in a large part because of this partnership.”

“The Kookaburras are a fantastic world-class team, these guys have now won seven out of eight of their last tournaments, they are a very humble, inspired team,” he said.

“They’re a WA-based team and they’re world champions. They’re high performing as a team and that really inspired us to join up with them and to support them.

“It’s not a team where there are individuals that are all important it’s really about the whole team performing and we thought that that was a great role model for us.”

Mr Power said FMG’s relationship with the Kookaburras started when it got involved with the National Indigenous Hockey Program in the Pilbara, which it continues to support.

In 2012 it provided the Kookaburras its first corporate sponsorship. Since then the team has won gold medals at the World Cup and Commonwealth Games, a bronze at the Olympics and is the world’s top-ranking hockey team.

The partnership involves Kookaburras athletes and coaches getting involved in FMG leadership, mentoring and personal development programs as well as providing a Mini Miners hockey clinic for FMG employees’ kids.

FMG’s logo appears on team apparel and both partners participate in school programs at Roebourne in the Pilbara aimed at encouraging kids to value and engage in their education.

Mr Vale said working with FMG staff on the schools program helped the sponsorship go from more than just a brand on apparel to engaging with many of FMG’s staff.

“Hockey Australia is not a huge organisation so we have one sponsorship manager, probably a couple of other staff that support this, we couldn’t make this work if it wasn’t for the Fortescue staff that are actually involved,” he said.