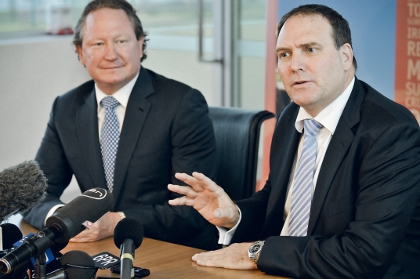 A fresh capital raising and further asset sales are believed to be among the options being evaluated by iron ore miner Fortescue Metals Group, which has halted trade in its shares as negotiations continue with banks over restructuring its heavy debt.

The company placed its shares in a trading halt this morning, after a 14 per cent plunge in its stock yesterday, losing $1.5 billion in market value.

Most of the plunge came in the last hour of trade yesterday after a media report that Fortescue had asked its lenders to waive its debt covenants for the next 12 months.

Late yesterday, the company said it was discussing "potential waivers", and today said it had held more talks with its bankers and that the discussions had progressed well.

Concerns about Fortescue's ability to pay back its gross debt of about $US9 billion ($A8.5 billion) have come to a head in recent days, after the iron ore spot price temporarily fell below $US100 per tonne ($A95), casting doubt on the company's profitability.

The company has resisted raising money by issuing stock, preferring instead debt financing.

It appeared to be still resisting a capital raising this afternoon, with a report saying chairman Andrew Forrest was in talks with Kerry Stokes' Westrac to save Fortescue's balance sheet through a $1 billion sale-and-leaseback deal of rolling stock and heavy machinery.

That followed the $300 million sale of a power station at one of Fortescue's mines last week, along with delaying $US1.6 billion ($A1.52 billion) of capital expenditure and cutting 1000 jobs and operational costs by $300 million.

CommBank Global Markets Research said in a note to clients that a Standard & Poor's report this week reported that Fortescue was at "serious risk of breaching its banking covenants", and placing it on CreditWatch with negative implications was serious.

"In our view, this puts further pressure on FMG (Fortescue) to consider raising equity ... FMG should seek additional equity now," it said.

If bankers do not meet Fortescue's request to waive its debt covenants including extending or syndicating a Bank of America Merrill Lynch $1.5 billion facility, it might not be able to draw down further and meet payment obligations.

It could also mean its debt falls due immediately.

Patersons Securities WA state manager, Lew Fellowes, however, said talk of Fortescue’s whole debt becoming due at once was premature, and a little far from the truth.

“The company has a number of options in terms of asset sales to raise funds, we’ve seen job cuts in the past week, the sale of a power station, and there has been speculation on the future of its Pilbara railway operations, which is another option to save funds,” Mr Fellowes told WA Business News.

“Conservatively (the railway) could be worth about $2 billion to the group, and they could also look at negotiations with Gina Rinehart’s Hancock Prospecting regarding infrastructure sharing, and that would raise towards $1 billion.”

Mr Fellowes said it was important to note that if Fortescue is granted relief on its covenants, there would be a “mad scramble” by investors to pick up the short positions that are currently available.

“(Iron ore) prices have come back recently and China is slowing down but I don’t believe there’s anyone out there that says China’s just shut up shop and its closed forever.”

A sharp fall in Chinese demand has caused the iron ore price to fall, with some suggestions that country's leadership has partly manipulated the price by stockpiling steel at uneconomic levels.