Fortescue back on growth path 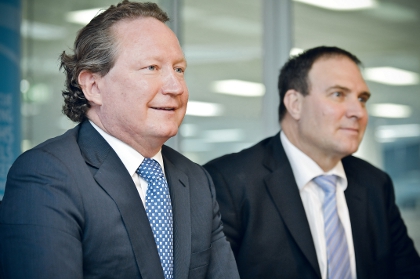 Six weeks after announcing a dramatic slowdown in its growth plans, iron ore miner Fortescue Metals Group says its stalled Kings project could resume later this year and be in production as early as August next year.

Chief executive Nev Power said the company would make a decision on restarting development of the 40 million tonnes per annum Kings mine by the end of the year, and signalled that was likely if iron ore prices stabilise around current levels or higher.

"It is a sensible time to restart or make a decision to restart in December," Mr Power told a briefing this morning.

"We'll continue to monitor the market conditions in China and if the iron ore price stays around where it is today then we'd be very confident about kicking that off."

He said the company was hoping to shift contractors from its Firetail project, currently under construction, straight onto Kings.

"There are significant advantages to starting in December," he said, adding that there would be additional costs if the restart was delayed.

Therefore, he anticipated construction could be completed by August and full production underway by the end of 2013.

That would take Fortescue's total production capacity to 155mtpa.

Fortescue is keen to bring the Firetail and Kings mines into production, because their operating costs will be substantially lower than its existing Christmas Creek and Cloudbreak mines.

With its earlier deferral of completion of the Kings deposit, Fortescue said its full year production target is maintained between 82 million tonnes and 84 million tonnes.

The company recorded an annualised shipping rate of more than 64 million tonnes during the September quarter, ahead of guidance, despite disruption from maintenance and expansion activities.

Fortescue said it expects the 62 per cent iron index price will stabilise in the short term at around $US120 per tonne as "the Chinese government prepares for its leadership transition in November and stimulus packages generate increased demand for steel and re-stocking at Chinese steel mills".

While the market remained volatile due to the oversupply of steel and low steel prices, most industry analysts expect the iron ore price to stabilise at approximately $US120 per tonne based on the global cost curve and the supply demand balance, Fortescue said.

The company said cost guidance for fiscal 2013 remained at $US45 to $US50 per wet tonne.

In early September, Fortescue shelved $US1.6 billion of spending and cut about 1000 jobs, downgrading expansion plans from a current 55 million tonnes to only 115 tonnes, instead of 155 million tonnes.

It also completed the distribution process for a $US5 billion senior secured credit facility.

The company said it had responded to market volatility and uncertainty over iron ore prices with cost savings of more than $US300 million for full year 2013.

"Approximately $US200 million of these savings are expected to be sustained into the future," the company's September quarter report said.

Mining and processing activities continued to perform in line with expectations at both Cloudbreak and Christmas Creek and the Chichester operations would expand to 95 million tonnes per annum by the end of the December 2012 quarter.

Fortescue expects total spending to be $US9.0 billion ($A8.82 billion), with the Kings expansion likely to be completed before the end of calendar 2013.