Fortescue Metals Group and Brazilian competitor Vale are looking to reshape the iron ore market, announcing this morning plans for Vale to invest in FMG's mining operations and for the two companies to form a joint venture to sell blended ore into China. 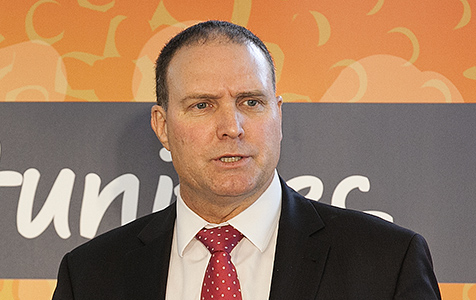 Fortescue Metals Group and Brazilian competitor Vale are looking to reshape the iron ore market, announcing this morning plans for Vale to invest in FMG shares and for the two companies to form a joint venture to sell blended ore into China.

The announcement follows a 23 per cent jump in FMG's share price yesterday, and a dramatic recovery in the iron ore price to $US63.74 overnight.

Fortescue chief executive Nev Power said he anticipated the joint venture would enable the Perth-based miner to get a better price for its ore while also resulting in lower costs.

He told a media conference call this morning he expected the new blended product would sell at a slight premium to the benchmark Platts 62% iron ore blend.

"The objective is to gain as much premium as possible," he said.

The blended product would combine FMG ore with low iron content but low impurirties and high 'sintering' quality, with Vale ore with a higher iron content.

"The blended product will achieve a better outcome than selling the ores separately," he said.

FMG ore historically has sold at a 10 per cent or greater discount to the Platts benchmark price.

Mr Power said the agreement would also allow FMG to achieve lower costs, as the mining of lower grade ore would allow the company to reduce its strip ratio.

He envisaged the blending would be undertaken at Chinese ports, as this would be the most efficient supply chain outcome for the Chinese customers.

He said it would give Vale an opportunity to replace some of its current blended ore, which is mined at various sites in Brazil and blended in Malaysia.

Mr Power said he expected the joint venture would sell 80 to 100 million tonnes per year, with FMG to supply 40-50 per cent of that volume.

"There may be opportunities beyond that, depending on market acceptance."

He emphasised that FMG had no intention of lifting its annual iron ore production above 165mt.

Under the non-binding memorandum of understanding announced this morning, Vale could also take a minority stake in FMG, and/or invest in its existing or future mining assets.

Mr Power said Vale's invetsment would be capped at 15 per cent, and he did not believe it would result in a full takeover.

"We wouldn't expect it would go any further."

He added the timing of this investment was open ended, and that it would strengthen the relationship between the two companies.

"The memorandum of understanding will allow us to work together to deliver long term value to our customers, through the efficient supply of an attractive and competitive new iron ore blend in China," Mr Power said in a statement.

In a follow-up ASX announcement released mid-morning, FMG said the MOU contemplates an acquisition of between 5 per cent and 15 per cent of its shares.

Mr Power said he did not anticipate any problems with regulators, arguing the jont venture would not lessen competition in the market.

He also insisted the big jump in FMG's share price yesterday was unrelated to the Vale announcement this morning.

"That is totally consistent with what has happened in the (iron ore) market," he said.

He repeated his long-held view that the iron ore price had been artificially depressed by trading in the futures market, as people had fears of an oversupply and concern over Chinese growth.

"The market has seen that neither has come to fruition."

Mr Power said he expected the MOU would be implemented in the next few months, and that blended ore would start to be sold in about six months.

He said the talks had been underway for about a year and did not believe Vale's participation was motivated by probems at its Samarco operation in Brazil, which is jontly owned by BHP Billiton.

"I don't think that's been a factor at all."