Mining industry groups in Perth and Canberra have come out today in favour of free markets in the iron ore industry, after Fortescue Metals Group chairman Andrew Forrest criticised the actions of heavywights Rio Tinto and BHP Billiton. 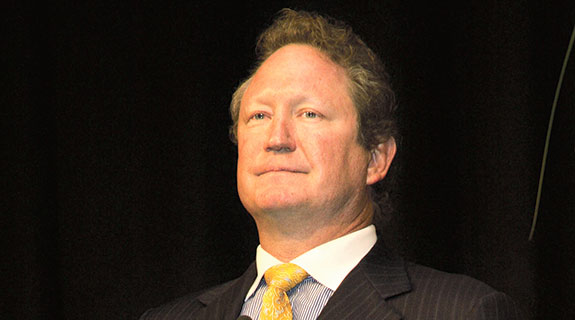 Mining industry groups in Perth and Canberra have come out today in favour of free markets in the iron ore industry, after Fortescue Metals Group chairman Andrew Forrest criticised the actions of heavywights Rio Tinto and BHP Billiton.

The Fortescue Metals Group founder has renewed his attack on BHP Billiton and Rio Tinto for continuing to increase supply despite softer demand for the commodity, and suggests their aim is drive competitors out of the market.

Australia was being "gamed" by the multinationals and losing tax revenue, Mr Forrest wrote in an opinion piece for Sydney's Daily Telegraph.

Mr Forrest urged Australians call on the federal government to consider their licences to operate "if they don't market Australian iron ore responsibly".

"Andrew Forrest is playing a dangerous game," Mr Pearson said in a statement.

"There is no role for government in 'managing' the iron ore market."

Any such move would give "a giant free kick" to Australia's competitors, such as Brazil.

"And one thing we know from commodity markets is that once given up, market share is very difficult to win back," Mr Pearson said.

"The Forrest view that Australia can effectively set the iron ore price is simply wrong."

The Chamber of Minerals and Energy of Western Australia did not name Mr Forrest today, but issued a statement saying it was critically important for the WA resources sector to be able to continue to operate competitively in the global market place.

“Calls to remove the ‘licence to operate’ for some miners should be ignored,” said CME chief executive Reg Howard-Smith.

“As evidenced by growth in the resources sector, we have prospered and thrived in an internationally competitive environment. We should not be frightened of the dynamics of the global marketplace,” said Mr Howard-Smith.

In March, Mr Forrest used an address at a Shanghai business dinner to call on BHP Billiton and Rio Tinto to cap production to boost the iron ore price, which is currently around $US60 a tonne.

The Australian Competition and Consumer Commission investigated whether he had breached cartel laws before dropping the matter.

Fortescue has also contributed to oversupply, ramping up production to 164 million tonnes per annum.