Billionaires Andrew and Nicola Forrest have commissioned James Giddy to paint a series of murals in WA during COP26 to raise awareness of the climate discussions in Glasgow. 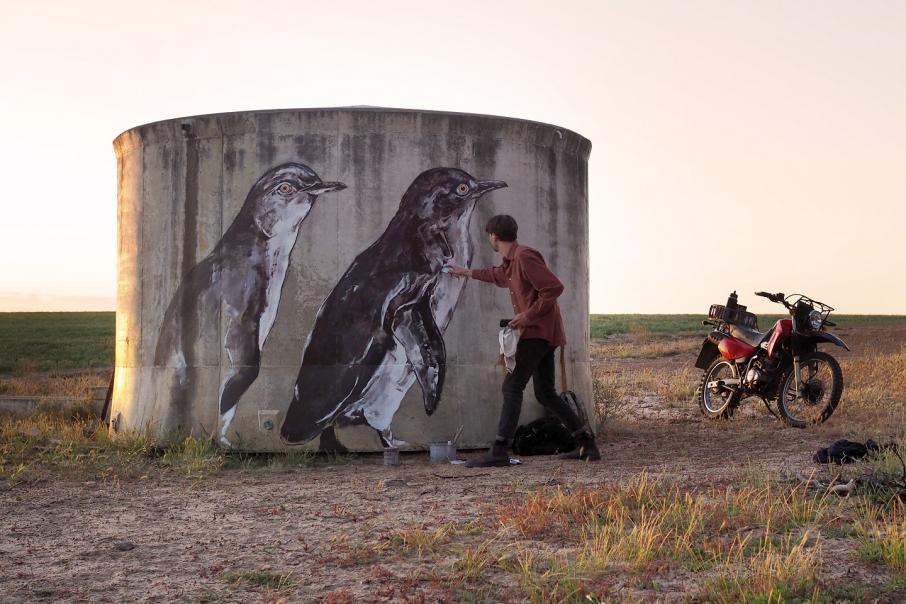 James Giddy painted a mural in the Wheatbelt.

Billionaires Andrew and Nicola Forrest have commissioned Western Australian artist James Giddy to paint a series of murals in Western Australia during COP26 to raise awareness of the climate discussions in Glasgow.

On the opening day of the 2021 United Nations Climate Change Conference, Mr Giddy unveiled his first murals in the Wheatbelt.

One depicts “lost” penguins waddling through a field of lupins and the second is of a Simmental bull with wind turbines painted onto its body.

Two other murals will be painted in Perth over the coming weeks.

Mrs Forrest said they wanted to spark conversation about climate change using art and send the messages of COP26 to Australia.

“We believe in harnessing the transformative power of the arts to shift attitudes and change the world,” Mrs Forrest said.

Mr Giddy was commissioned privately by the Forrests, outside of their charitable organisation Minderoo Foundation.

He is a Perth-based artist who has painted murals throughout WA, New South Wales and Queensland as well as internationally in India, America, South Africa and Indonesia.

Mr Forrest has been vocal in the lead up to the summit and is in attendance in Glasgow.

He advised Prime Minister Scott Morrison to commit to a net zero emissions target and Mr Morrison subsequently did.

Mr Forrest has also been campaigning for the use of green hydrogen as a renewable energy source which his company Fortescue Future Industries is developing.

About 190 world leaders are meeting for the climate conference from October 31 to November 12.