The Minderoo Foundation co-founder wants the business sector to understand the importance of investing in early childhood development. 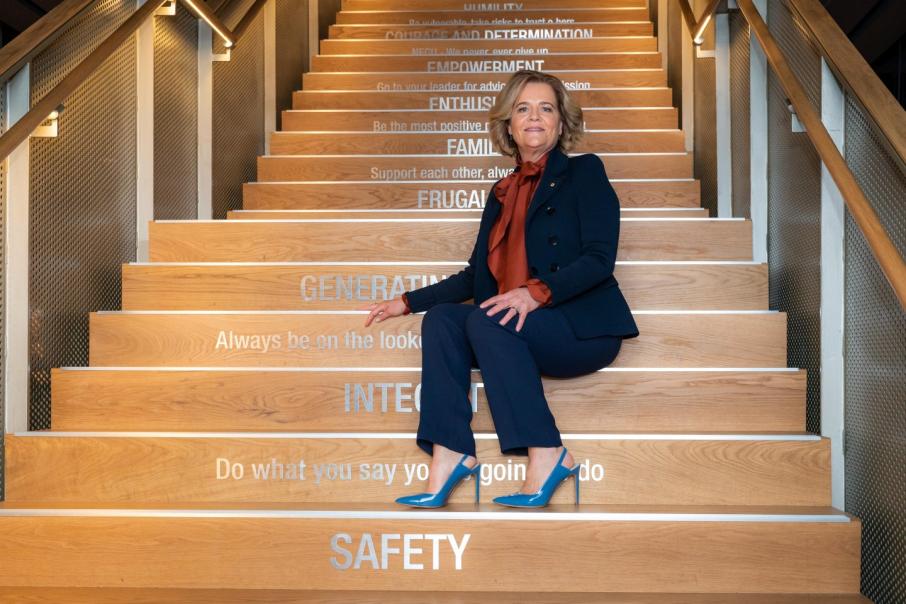 It was about 20 years ago when Nicola Forrest and her husband, Andrew, got serious about philanthropy.

Perhaps fittingly, the opportunity to establish the Australian Children's Trust came from one of the biggest setbacks in Mr Forrest’s business life.

They used the money Mr Forrest received when he was removed from the board of his former company Anaconda Nickel.

“With that payment, we used that money to set up the trust,” Mrs Forrest said.

“That was amazing to use that opportunity, where we felt like we had almost lost everything to create the foundation.”

Twenty years on, the trust has morphed into Minderoo Foundation and its bank balance has grown from about $2 million to nearly $2 billion.

Minderoo is one of Australia’s largest and most active philanthropic foundations, with programs tackling huge global issues from slavery to pollution and cancer.

One program that is particularly close to Mrs Forrest’s heart is Thrive by Five.

“We want every child to have the opportunity to reach their full potential, that is the mission,” Mrs Forrest told Business News.

“Everything we do at Minderoo is driven by evidence and research,” she said.

“The scientific evidence is overwhelming as to the importance of those first five years, to set up the trajectory of a child’s life.”

To illustrate the challenge, Mrs Forrest said 22 per cent of children in Australia arrived at school developmentally delayed.

She believes this is much more than a social issue.

“The triple dividend affects all businesses and all of us in this country,” she said.

The scale of the problem was quantified in a report prepared by the Telethon Kids Institute and the UK’s Early Intervention Foundation, titled ‘How Australia can invest in children and return more’.

“The number of children and young people experiencing serious issues in Australia is alarming and increasing,” the report concluded.

“We find that Australia spends $15.2 billion every year because children and young people experience serious issues that require crisis services.

“Yet the opportunity exists to prevent the suffering of young Australians presenting to these services while, at the same time, reducing pressure on government budgets.”

The largest estimated cost was in child protection services, about $5.9 billion a year (see graph). 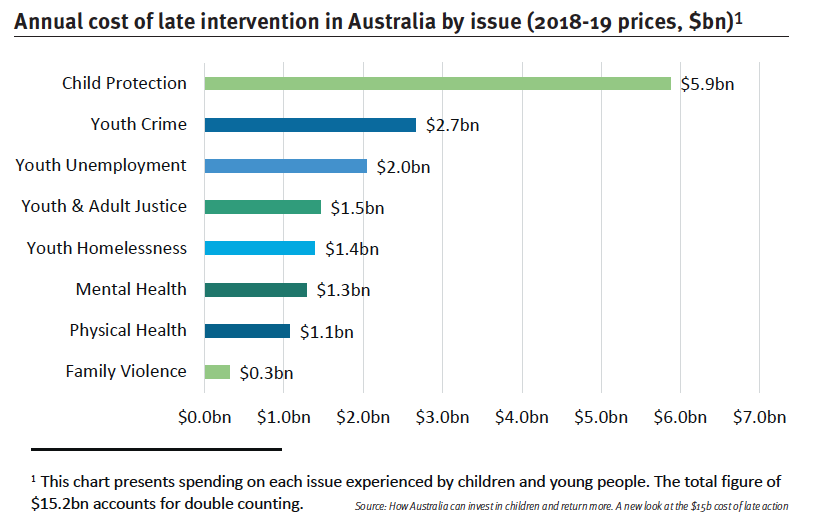 The report found that 124,000 children and young people received support from specialist homelessness service in 2017-18.

It also reported a 25 per cent increase in mental health-related hospital admissions.

Mrs Forrest believes there is a big gap in service provision across Australia.

“We have a good maternal health system, and we have a good education system, universally accessible; what we don’t have is any system in between the two of them,” she said.

She said people should be able to get child care services and early learning services in their own community, to make sure they don’t fall through the cracks.

This would help children, while also helping parents wanting to re-join the workforce.

The productivity gains would come from having healthy children able to reach their full potential.

Mrs Forrest said this was particularly relevant in the post-COVID world, where many employers were struggling with labour supply challenges.

Minderoo’s Thrive by Five campaign marries up with a push by the Business Council of Australia to boost female participation in the labour force.

Business Council chief executive Jennifer Westacott said with Australia’s population growing at its slowest rate in 100 years, it was critical to lift female participation and make the most of homegrown talent. 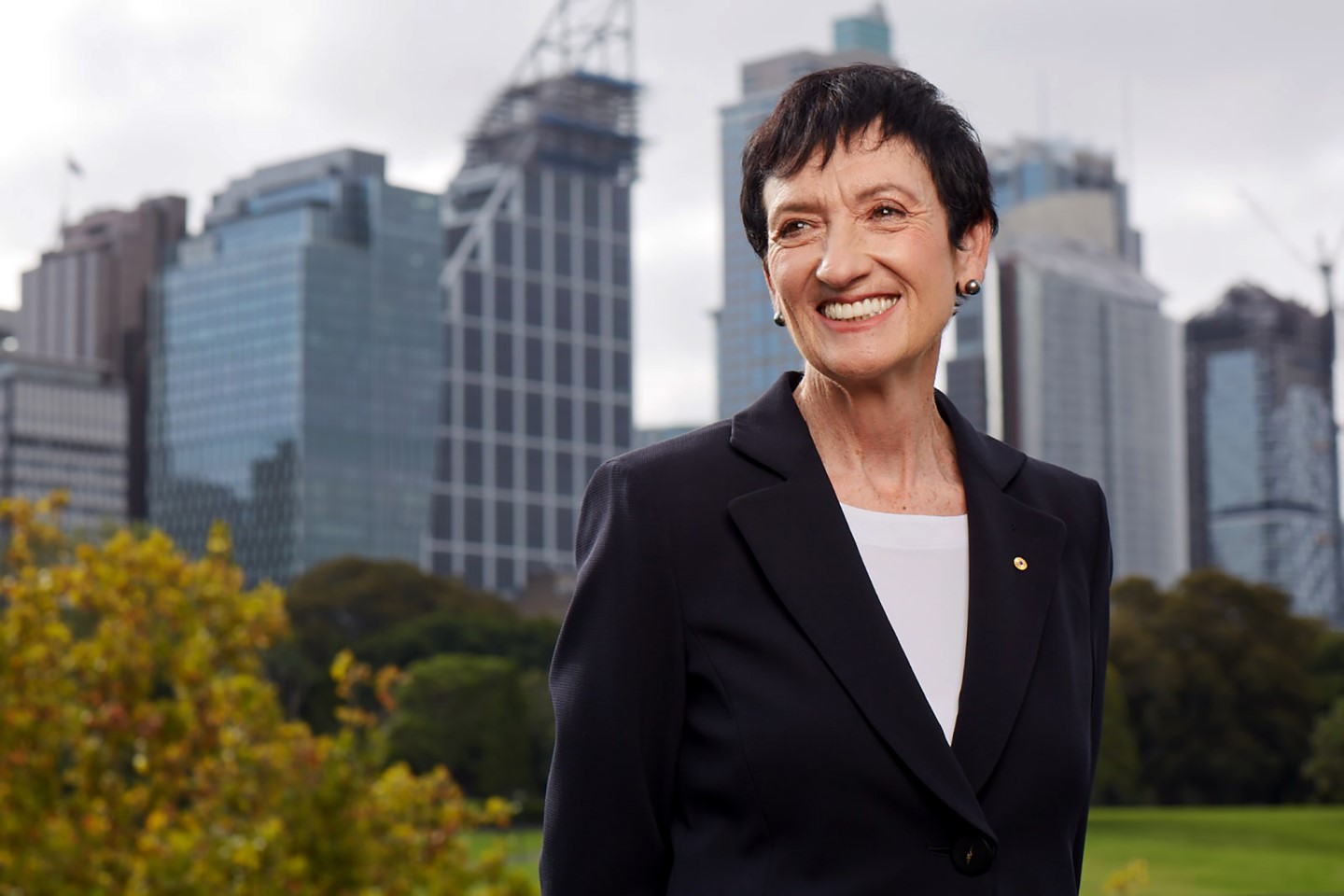 Citing Productivity Commission research, she said more than 90,000 people across Australia were not in the workforce last year mainly because of the high cost of child care.

This includes an estimated 13,800 people in Western Australia.

The Business Council has proposed a flexible child care system that would encourage both parents to take more equal caring responsibilities.

“The current system encourages one parent, almost always mum, to take the lion’s share of time away from work,” Ms Westacott said.

“A lot of the work we do is about changing hearts and minds; it’s about advocacy and about making people realise there is an issue,” Mrs Forrest said.

“We were looking for someone to drive this, we needed a campaign to align many voices in Australia.

“Jay has done an incredible job in that, from the ACTU to the Business Council of Australia and everything in between.” 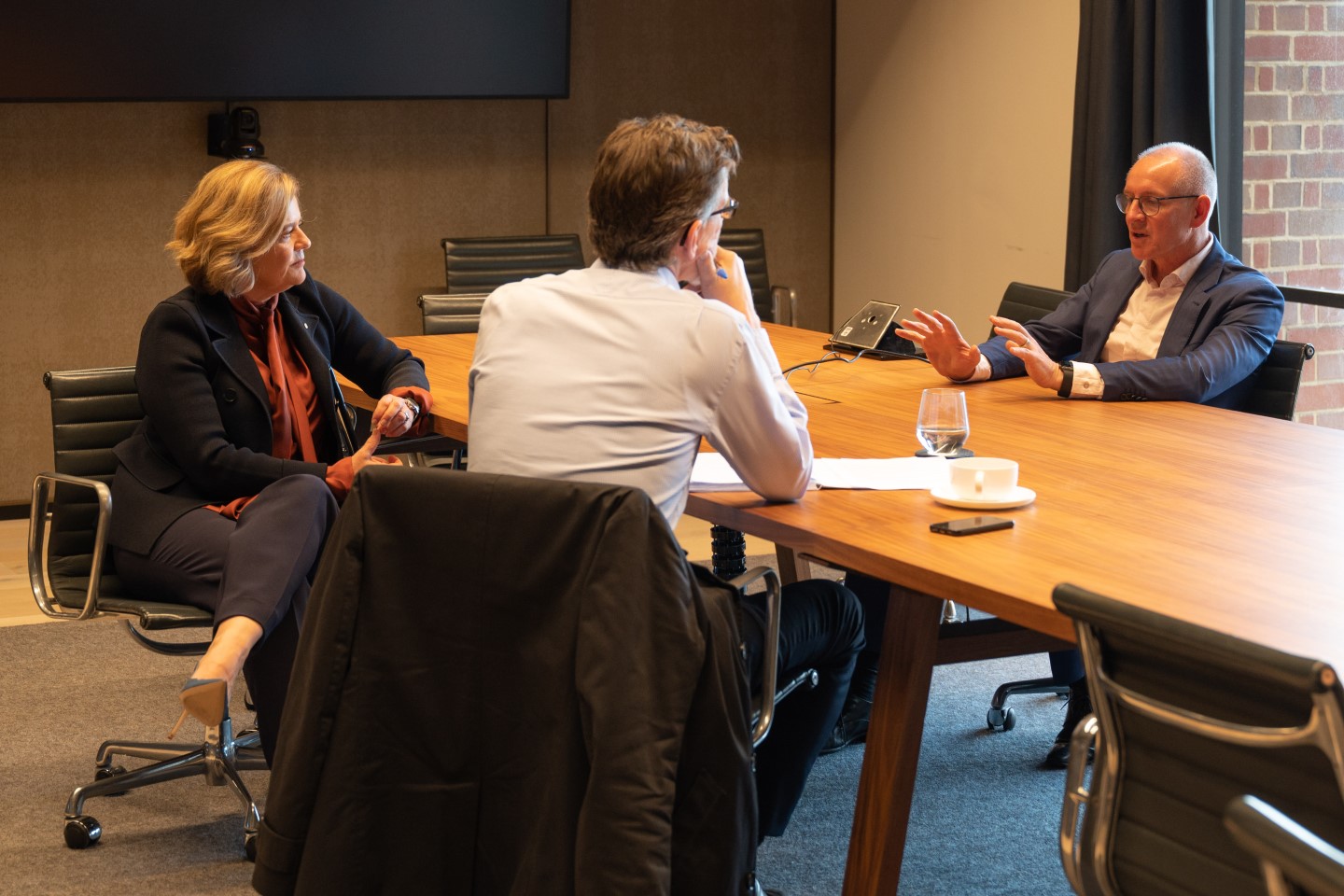 Mr Weatherill said he was only loosely acquainted with Nicola and Andrew Forrest prior to joining Minderoo.

“We had a very exciting conversation when the foundation was doing its annual report roadshow and they came to Adelaide at the end of 2019,” he said.

“We had a chat that ended up being all about early childhood and we found we were almost 100 per cent aligned on the importance of it and the challenges.”

That conversation would have drawn on Mr Weatherill’s experience as a minister and later as premier of SA, when he spent a lot of time and effort seeking to lift the profile of early childhood development.

“Nicola and Andrew had been doing some good work in thought leadership, demonstration projects, awareness raising, but I had a sense that they were frustrated at the pace of change, and I was frustrated with what I was able to achieve,” Mr Weatherill said.

Mrs Forrest’s advocacy campaign included getting a group of prominent women across Australia to co-sign an open letter to the prime minister in March.

The letter, which attracted considerable media coverage, called on the federal government to make the lives of Australian women easier and to start fixing the early learning system.

It wanted the child care subsidy lifted to 95 per cent for all children and called for the subsidy to be made available to all children regardless of the service type and the income or work status of the parents.

With a view to the longer term, it called on the government to start workforce planning for a universal system.

This would include funding appropriate pay and conditions for educators and child care workers to end the problem of skill shortages, high vacancy rates, and high staff turnover rates across the sector.

To achieve these outcomes, it asked for early education and child care to become part of the National Cabinet reform agenda.

It reinstated the women’s budget statement – which had been scrapped in 2014 – to provide visibility of how decisions would affect women’s lives.

More substantively it included a $1.7 billion child care package, with more families able to recoup 95 per cent of the costs of child care.

“The last budget we felt was a step in the right direction and a response to the pressure that’s been mounted, but it’s one small step,” Mrs Forrest said.

Mrs Forrest acknowledged that Aboriginal children were disproportionately represented in the issues Thrive by Five wants to tackle.

However, she shies away from policies targeting indigenous Australians or any other specific group.

She said Mr Weatherill had helped to shift her thinking.

“I was always focusing on those 20 per cent, the most vulnerable, like a benevolent society,” Mrs Forrest said.

Asked whether universal child care subsidies could be seen as ‘middle class welfare’, Mr Weatherill said it should not be viewed in that manner.

“We have universal systems for Medicare and school education, so there’s no reason why we can’t have something like that for the early years,” he said.

“Parents should have the choice.”

Mrs Forrest noted that Minderoo’s Generation One program was focused on Aboriginal people and did so by targeting secure jobs rather than providing benefits.

Challis community school in Perth’s southern suburbs provides one model for what Mrs Forrest wants applied widely. Minderoo has been supporting Challis since 2012.

It is unique in offering health, education, and social services from birth through to year six.

“As a parent, you only need to go to one place, and they will help you or refer you.” 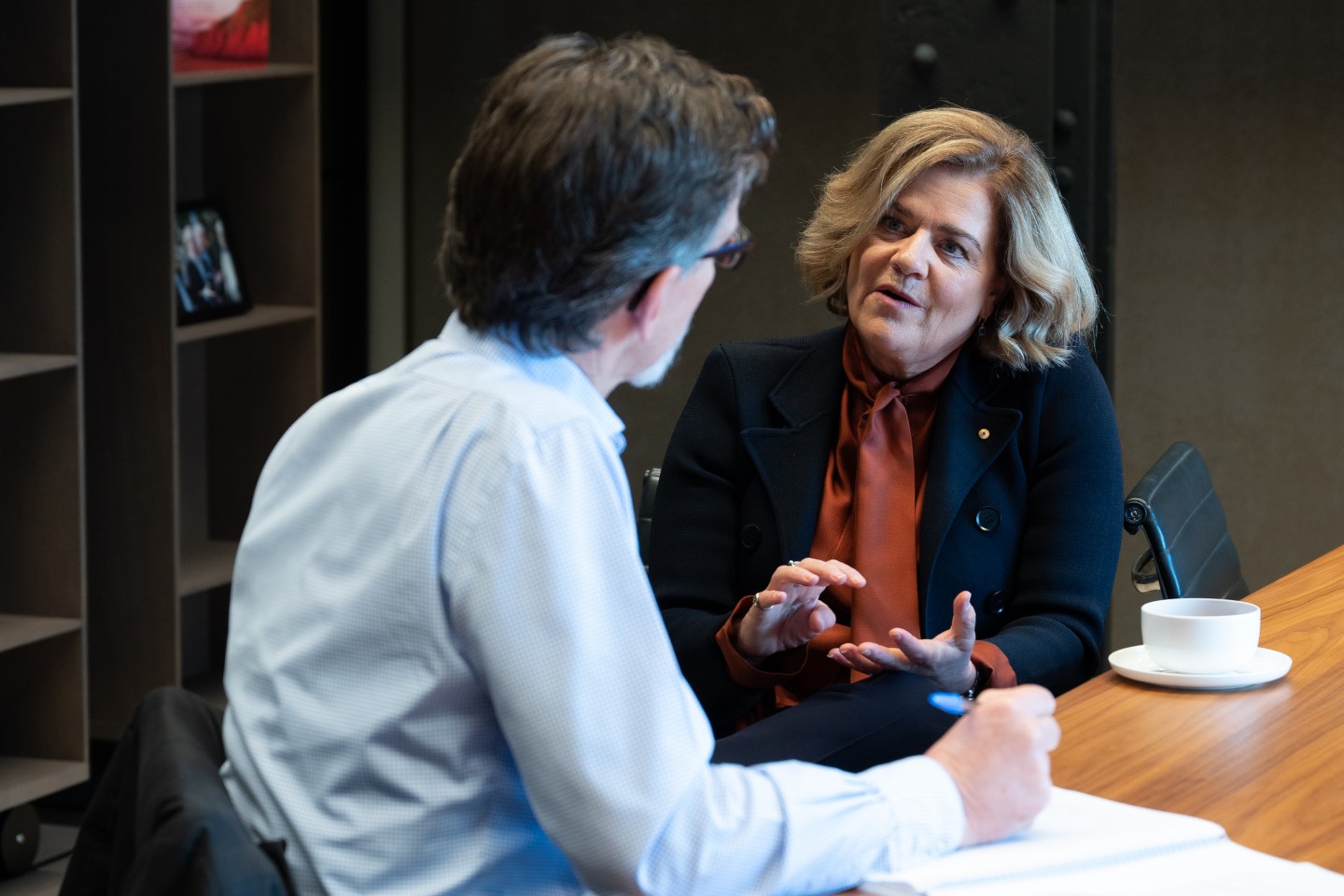 Nicola Forrest says Challis community school is a great example of what can be achieved in service delivery. Photo: David Henry

She likened Challis to a drop-in centre where parents can get advice on everything from domestic violence to health or hearing issues in their children.

She said increased investment in child care was a means to a similar end.

“Child care is actually the solution in many cases because it can be the place where people can go for support and advice.”

Challis provides an indication of what could be implemented under Minderoo’s Early Years Initiative.

This program was launched three years ago with considerable fanfare, including Minderoo and the state government committing $50 million over 10 years to deliver integrated services in four communities.

“I would have to say it’s probably at a pace that is much slower than we would normally go and there have been learnings,” he said.

“We’ve got to a point where hopefully we are going to see results.

“It has been very much about listening to what the communities want, mapping services already there and working out what they need.

“You can’t just put things into a community and say ‘Here you go’.”

The first three communities are the upper Great Southern, around Katanning and Kojonup, along with Armadale in Perth’s south and Bidyadanga in the Kimberley.

In each of these locations, Minderoo has recently been selected as the delivery partner for the federal government’s Connected Beginnings program, which will provide extra funding.

Connected Beginnings has similar goals to the Early Years Initiative – it aims to bring about systemic change in the integration of child and maternal health, family support and education services for children under five years of age Mr Weatherill revealed the fourth Early Years Initiative community will be Derby.

World Vision has already been contracted as the delivery partner in Derby for Connected Beginnings, which has been implemented in 23 communities across Australia.

The long-term reform agenda Mrs Forrest is pursuing would be daunting for most people, but she remains positive.

“Human stories are the things that drive all of us,” she said.

“You only need to hear one positive story from the work that you do.”

She was also encouraged by the capability of her team at Minderoo.

“We treat our philanthropy in a similar way to how you would drive a business, we drive for outcomes.