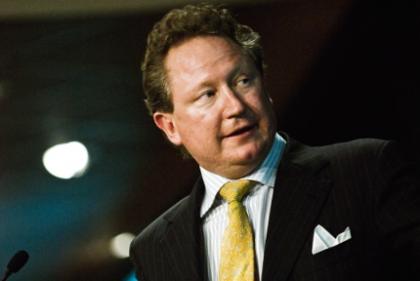 Fortescue Metals Group chairman Andrew Forrest has spent nearly $39 million in two days increasing his shareholding in the mining company he founded, as its shares and iron ore prices plunge.

Mr Forrest bought five million shares for $20.1 million at an average price of $4.02 on Monday.

He spent another $18.5 million yesterday buying the same amount of shares at $3.70, in what is being seen as an attempt to prop up confidence.

Investor anxiety about the company's massive debt level is rising as quickly as the iron ore price is falling. The commodity is the miner's only earner.

This is well below the $US120 ($A116) "price floor" that mining executives said the ore wouldn't drop below, as recently as a month ago.

Mr Forrest's stake Fortescue now stands at 32.8 per cent and follows a $105 million purchase of shares over the course of more than a week in June.

Fortescue is committed to a $9 billion expansion that is unprecedented in the Pilbara region of Western Australia. The expansion, which is largely debt funded, will nearly triple Fortescue's iron ore output to 155 tonnes a year by next June.

Fortescue shares were trading at around three-year lows on Thursday, down three cents at $3.62 by 1553 AEST.

The iron ore price is being pushed down by a range of China-related factors, including too much investment in steelmaking there creating an oversupply.

China's economy and demand has slowed at the same time Australian producers, including Fortescue, BHP Billiton and Rio Tinto are increasing production.

Fortescue is more vulnerable than its more diversified mining peers, with a falling iron ore price reducing the cashflow it needs to pay back debt, which is tipped to peak at no less than $10 billion.

The company argues that its debt servicing abilty will be aided by an expected rapid pick-up in its iron ore production volumes, on the back of investments it has already made.

Fortescue chief executive Nev Power said he was confident the iron ore price would rebound to the $US120 ($A116) a tonne level as Chinese steel mills began running down inventories.

He told a business lunch the company had taken on extra debt as a short-term, flexible funding solution because of the volatility of iron ore prices, and that it could quickly pay the debt back if needed.

BHP Billiton's decision to postpone the $30 billion Olympic Dam mine expansion might be a positive as it would help to reduce Fortescue's development costs, including labour and equipment.

"I think the silver lining in this is the deferral of some of those projects will take the heat out of the labour market," Mr Power said.

"We'll see more sensible expectations there, and it will also free up some capacity in some of our contracting community where it has been very stretched," he said.