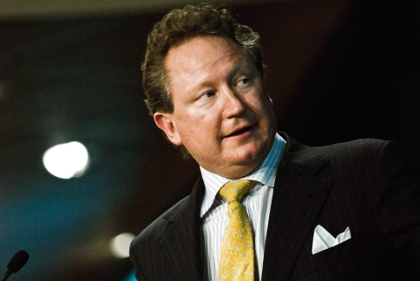 Andrew Forrest has thrown his support behind Apex Minerals' new management team, led by industry stalwart Ed Eshuys, pitching in $17.95 million to increase his stake in the company to just under 20 per cent.

Apex announced today that The Metal Group, a privately-owned investment vehicle controlled by Mr Forrest, would invest up to $17.95 million through the exercise of options priced at 30 cents per share.

Apex also said it would seek shareholder approval for the grant of additional options, also priced at 30 cents per share, to Drummond Gold and Mr Eshuys.

The move takes The Metal Group's shareholding to 19.9 per cent, with Drummond Gold and Mr Eshuys the next largest shareholders, with 14.9 per cent and 5 per cent, respectively.

“We are pleased to have secured the strategic and financial support of Andrew Forrest and The Metal Group as we undertake the task of restoring Wiluna’s profitability for the benefit of Apex shareholders,” Mr Eshuys said in a statement,

“We believe that strategic advice about the Company’s future direction and the ability to utilise the network of the Metal Group which has achieved a strong track record of building value in the minerals industry will bring real benefits to Apex shareholders.”

The agreement remains subject to a number of conditions.

Apex said the investment was a direct backing of its turnaround strategy, which is focused on returning the Wiluna gold mine to profitable production.

Mr Eshuys took over as chairman early last month to spearhead the rescue of the embattled miner through a board restructure and a $22.2 million capital raising, priced at 0.2 cents per share.