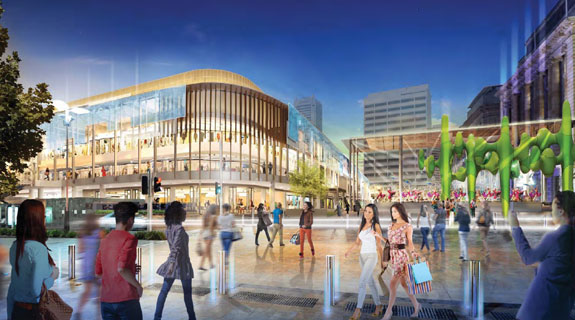 An artist's impression of the new Forrest Chase.

Work will start on a game-changing redevelopment of Forrest Chase in coming months, with fund manager ISPT expected to receive planning approval for a major revamp of the CBD mall later this week.

The redevelopment, which has a base construction cost of around $70 million, according to development assessment panel documents, has been recommended for approval by the City of Perth and will be evaluated on Thursday.

The existing Myer department store will remain as the flagship of the mall, however the redevelopment involves unifying Forrest Chase and City Central as a more integrated precinct.

A new flagship retail tenancy, across two or three levels, is proposed for the second floor level facing Murray Street Mall, with an office tenancy proposed to be developed behind, extending to Wellington Street. Existing office space on the third level will be retained under the redevelopment.

The pedestrian walkways around the existing building and between Forrest Chase and Carillon City will be demolished and replaced to improve the aesthetics of the mall, while overpasses across Wellington Street and to David Jones are to be unchanged.

Ground floor shop fronts will also be extended to create a colonnade area beneath the walkway adjacent to the Murray Street Mall.

Other aspects of the revamp include an alfresco seating area on the ground floor to enhance an upgraded food and beverage offering. An artist's impression of the new walkways proposed on the first floor.

ISPT has been increasingly active in Perth in recent months, buying a 75 per cent stake the Banksia Grove Village shopping centre via its Coles Alliance in December, while also committing to acquire land and fund the development of the planned Lakelands Shopping Centre.

The acquisition of Banksia Grove was part of a seven-centre portfolio boost by ISPT’s Retail Australia Property Trust.

At the end of December, ISPT’s retail trust was valued at around $800 million.