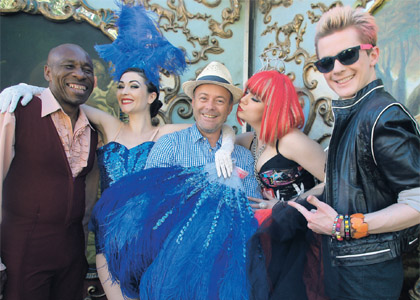 WHAT A SHOW: Marcus Canning (centre) says the festival’s ability to remake itself has paved the way for Fringe World’s current success. Photo: Bohdan Warchomij

THIRTY years after its first incarnation started with a budget of just $3,000, the 2013 Perth Fringe World Festival has revenue amounting to millions.

The trajectory has not been linear, however. The ‘fringe’ festival lasted just five years back in the 1980s before changing its form to the Artrage Festival, named after the organisation that set it up.

It was not until 2008, when Artrage held a review while celebrating its own 25th anniversary, that it was decided to bring back the fringe, embarking on a pilot season in 2011.

In its latest guise it appears that the festival has hit its mark and found the market it was seeking.

This year, according to Artrage CEO and Fringe World Festival director Marcus Canning, the plan is to nearly double the ticket sales to 90,000 with an offering that includes more than 2,000 artists performing at 1,700 events, which has created a need for more venues in new locations including Mt Lawley, Leederville, Maylands, Subiaco and Fremantle.

To help fund the fringe’s increased offering, Lotterywest and the state government have boosted their combined contributions by $350,000 to a total of $1.45 million, which makes up 30 per cent of the festival’s $5 million budget.

A further $1.1 million comes from support partners including Western Power, Woodside, Little Creatures, The West Australian, Nova 93.7, the City of Perth Parking and wine maker Vinaceous. The remaining 40 per cent of the funding comes from sales made during the festival.

Mr Canning said his organisation’s willingness to remake itself helped bring about the return of the festival following the 2008 review.

“One thing that’s really defined Artrage is that it’s changed and evolved a lot over time,” he said. “Like any good company or organisation there is a need to stay relevant. At the time [2008] we asked ourselves .. .for the next 25 years how can we best serve the culture of Perth?

“Is now the time to return to Fringe?”

That question led to the fringe pilot season, including the purchase of Perth’s first Spiegeltent. It also heralded Artrage’s relationship with Deloitte, partly funded by a Lotterywest grant, which provided for the preparation of a business plan.

Working closely with Deloitte partner Andrew Robinson and his team, several targets were agreed upon for the next three years.

In the first official year, 2012, the festival reached its third-year targets, selling 50,000 tickets and generating more than $1 million in box office sales.

Mr Robinson joined the Artrage board as treasurer in 2011 and helped Artrage to alter its business plan according to the circumstances.

Mr Canning said such rapid growth had led to the inevitable question of how far the festival should go.

“If the festival doubles the success of last year, then where’s the threshold?” he asked.

Mr Canning said his gut feeling was that this year’s festival forecast was about the right size.

He said it was most likely that Artrage would continue with this current model for the next few years.

The success has also brought in other private funding.

After the pilot season, oil and gas producer Woodside became a key sponsor, supporting a tour of the festival to the Pilbara.

This regional participation is due to expand with state government backing. It has provided $150,000 towards an initiative called Outer Fringe, which will involve performances in Albany, Esperance, Geraldton, and the Pilbara.

A study estimated the festival was worth $7.9 million to the local economy.