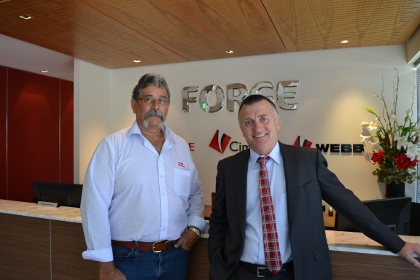 It is the second contract won by Cimeco and Pilbara Logistics; in June last year, they won a contract for mine buildings and support facilities for Rio Tinto’s Hope Downs 4 iron ore expansion. The scope of this work is believed to be about $100 million.

Since then, Cimeco and Pilbara Logistics have moved to formalise their relationship, initially entering into a memorandum of understanding to provide civil, mechanical and electrical services to the mining and construction sectors in the North West.

Forge managing director Peter Hutchinson said CPL would be able to win work that neither Cimeco or Pilbara Logistics would be likely to win on their own.

He told WA Business News that CPL would have its own management team and actively bid for more work in the North West.

Led by majority shareholder Geoff Stocker, Pilbara Logistics has become one of the busiest indigenous contractors in the North West.

Its projects have included waste management services for BHP at Port Hedland, CB&I on the Pluto gas project and Atlas Iron at its Pardoo mine.

It has also undertaken earthworks for BHP, environmental services and road maintenance at the Telfer gold mine, and maintenance services at FMG’s port operations.

The new $41 million contract is the second major contract announced by Forge this year.

In March, Cimeco was awarded a $125 million contract for civil and concrete works for iron ore processing facilities at FMG’s Solomon expansion project.