Once a local rural co-op, Wesfarmers has a range of offshore options. 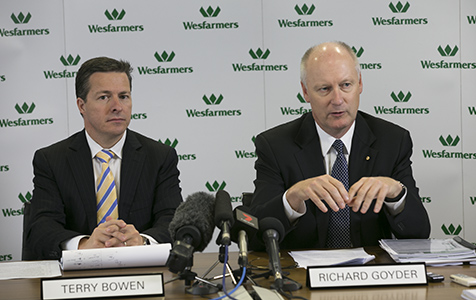 Once a local rural co-op, Wesfarmers has a range of offshore options.

IT was heartening last week to hear Wesfarmers CEO Richard Goyder say the company was at least open to the idea of looking offshore for growth opportunities, and investing outside Australia was a possibility, even though the focus was still on its core businesses.

The idea of Australian expansion offshore has been a recurring theme in my columns over the years. In part that is due to national pride, because I want to see our ideas flourish overseas rather than just accept others are always better, but also because many of the barriers holding companies back from entering foreign markets also reflect the reasons many Western Australian businesses fail to move across the Nullarbor.

Wesfarmers is a great example of the latter. Now it is also a national giant, so it is often the subject of this kind of debate.

Of course Wesfarmers isn’t completely isolated on the Australian continent. It has operations in New Zealand for instance and, in the case of insurance, even operates in the UK; but for all intents and purposes it has not really looked far beyond our borders.

Firstly, there was no reason to. I recall asking former CEO Michael Chaney the very same question and he reckoned there was plenty of opportunity in Australia, a market the company knew well. That was before the Coles acquisition, though, which has made Wesfarmers part of retail duopoly in supermarkets and liquor as well as increasingly important in other areas, such as fuel.

The Australian Competition and Consumer Commission is regularly looking into what Coles has allegedly done or is considering buying, suggesting the company has outgrown the relatively small market of Australia.

Secondly, I think there has been very reasonable caution shown by Wesfarmers’ management and board. Too many Australian companies have burned up shareholder capital in poorly executed offshore moves. Banking in the UK and the US as well as brewing in China spring to mind.

There are some good news stories, however.

Some have survived the move offshore and now flourish – CSL is an example, as is ANZ.

The options are endless for Wesfarmers, because it is a conglomerate with few restrictions in terms of what sectors it could enter. Naturally, its big strengths are retailing, mining, chemicals and insurance.

But there are limits to how far its Australian experience can take it, especially if it looks to Asia, a logical steppingstone in terms of proximity and growth potential.

Many businesses in Asia operate in low-cost environments where the high value we place on human resources is considered a luxury.

I have always been surprised that environmentalists have failed to link Coles with coal mining, but I fear that venturing into Asia has risks around what people are paid and how they treated – and if you are Australia’s biggest private employer you don’t want that to come back and bite you.

There are also obvious cultural barriers in terms of the way consumers behave, not to mention the political requirements of operating in places that are relatively new to democracy.

Nevertheless, some areas of Wesfarmers’ expertise must be applicable. Does its big box hardware operation translate into markets where there is a growing middle class desperate to start DIYing? Surely there are mining projects that a knowledgeable operator could run better; dozens of WA mining and exploration companies already think so.

Going offshore is not for the faint-hearted, but staying behind increasingly weak barriers to entry is hardly ensuring investor security for the future.

While Wesfarmers appears to have shrugged off the challenge to its hardware business by a Woolworths-led joint venture, it must be alarming to see how many consumers and lobby groups welcome overseas competition such as Aldi and Costco.

Surely, Australian retailers could be equally seen to be lifting competition if they entered new markets.

My view, as I have stated a few times in the past, is that Australian firms ought to select smaller national markets where they will be the 800-pound gorilla from day one. There are many markets in the Pacific, for instance, where Australia is seen as the natural economic leader. On their own, most Pacific nations are small but collectively they amount to a sizeable market when compared to Australia’s smallish 20 million.

Our companies have to get to scale before venturing into major offshore markets. Partly they have to grow uncomfortably big in their own country, then they have to bulk that up with smaller additions before anything too big can be taken on.