What was done decades ago as common business practice is increasingly fraught these days. 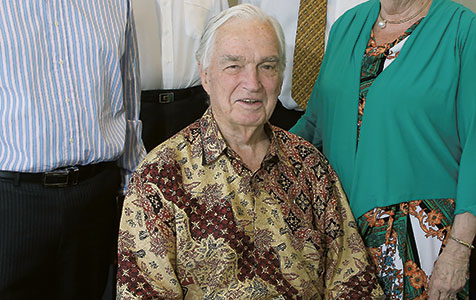 TRANSPARENCY: Harold Clough was a pioneer of doing business in Indonesia, and was open about what it took. Photo: Bohdan Warchomij

Many years ago I interviewed Harold Clough in his role as chief executive of engineering firm Clough, the family business he listed on the stock market.

Always very frank in his interviews, when asked about how Clough did business in Indonesia the legendary businessman said the company simply hired a local who was paid ‘what was needed to get things done’, or words to that effect.

I recall my editor at the time being thrilled with the response, surprised that Mr Clough, a Perth establishment businessman, had been so open about his business dealings.

The story was published and nothing more, at least as far as I was aware of, was ever said or done.

The fact is, that was how business was done in Indonesia in those days and if you wanted to operate there you did so under their rules. I doubt it has changed that much, but I wonder if Mr Clough’s modern counterparts would talk with such candour these days?

Certainly there are plenty of other places where business is still done that way. In parts of Africa, Latin America and the Middle East it would be commonplace. There must be plenty of grey areas in doing business in these places, which many WA firms do.

Look at national engineering and construction group Leighton Holdings, which has been recently embroiled in scandal related to allegations of corruption around contracts in the Middle East.

Strangely enough, I met one of the Leighton executives named in the scandal just a few months ago at an event to mark the relaunching of the Clough scholarship program at UWA, attended by many previous winners and former employees of the Perth firm.

The whole saga certainly brings home the risks for executives working in foreign countries under what seems like a different set of rules, especially this century as we increasingly try to impose our local laws on those operating or doing business elsewhere.

Just look at the damage done to the live cattle trade by the Australian government in demanding Indonesia adopt our abattoir standards.

Do you go along with flow or do you try to change the system? When your own success depends on winning business, how far do you go? Do those in the know look the other way?

What is certain is that engaging in business in places where such questions must be asked increasingly comes at the peril of the participant and their business.

Many years ago I travelled extensively throughout Asia, Russia, and Eastern Europe. I learned numerous ways to circumvent the system – which was often geared towards corruption.

I learned that there were times when patience and persistence could beat endemic corruption.

But other times I had to break local laws or engage in outright bribery to achieve a necessary outcome. The amounts involved were trivial, the rules were often ridiculously xenophobic and the transactions were commonplace; does that make it any better?

Ultimately, each of us has our own moral compass and our own standards. Even in Australia, different people interpret the same rules in vastly different ways. That is why we need a legal system and have independent bodies such as crime and corruption watchdogs at state and federal level.

Doing business overseas comes with its own risks and, while am I slow to condemn, I have little sympathy for those who don’t consider the potential impact of their actions.

In a perverse way, I see similarities with the Greenpeace activists, including one Australian, jailed in Russia recently for protesting against drilling for oil in the Arctic.

No matter what the merits of the cause, surely those involved must have considered the fact that Russia is likely to interpret the legality of its actions under international law in a very different way to most Western nations.

When people are knowingly engaged in activity that is attached with high risk, no matter what the cause, they have to accept there is the potential for it to go wrong and accept the consequences.