No matter what Perth’s professional sporting outfits do on or off the park, it’s the quality of the venue that dictates the pace of their financial growth. 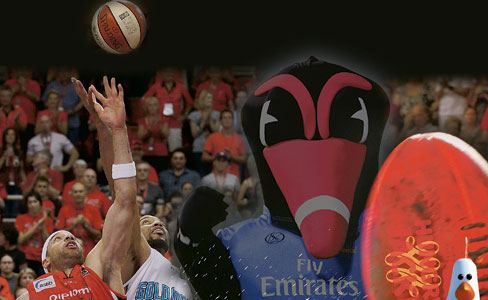 NEVER mind victories and defeats, Perth’s top-flight sporting organisations have one common request – they’d all like a decent place to play.

While public debate continues on the most appropriate location to build a $1 billion-plus multi-purpose stadium, the harsh reality for most of Perth’s major sporting clubs is that issues with playing venues are hurting their bottom lines.

In the Australian Football League, the West Coast Eagles has for years had its membership constrained by the 42,922 capacity at Patersons Stadium. West Coast’s 2010 membership came in at 54,875.

In an attempt to continue growing its membership, the club has ‘In the Wings’ members, for those willing to put down their hard-earned dollars in the hope of one day securing their own reserved patch at Patersons.

But Eagles chief operating officer Richard Godfrey said the current set up was creating doubts about the next generation of West Coast fans.

“Firstly we’ve got waiting lists, but the big concern for us is that it’s hard to get kids into games,” Mr Godfrey told WA Business News.

“They just can’t get a seat, so we’re missing a generation of supporters.

“So that’s what we’re hoping a new stadium will do for us, get those kids into the game.”

The Fremantle Dockers, too, is nearing capacity, and will also soon have its membership growth curtailed by a lack of seats.

Fremantle’s membership peaked at 43,000 in 2007, and with the side coming off its maiden finals victory at home last year, the Dockers are expected to eclipse that figure in 2011.

“We achieved a significant milestone in season 2010 that saw us as the number one attended sporting team in WA for the season,” Fremantle chief executive Steve Rosich said.

“Clearly that’s going to be a great challenge to emulate in 2011, but we think we’re up to it.”

Premier Colin Barnett says a decision regarding the stadium will come in June, and current talk is he favours the Burswood Peninsula as its location, either at Belmont Racecourse or the State Tennis Centre.

But for codes that use a rectangular field, even with funds committed, plans in place and an imminent upgrade at nib Stadium, the situation seems much more urgent.

Conditions at the antiquated nib Stadium, once known as Perth Oval, have resulted in significant financial losses in recent seasons for both its co-tenants, the Perth Glory and the Western Force (see page 11).

In order to get the ground up to A-League or Super Rugby standard each week, the Glory and Force each has to fork out upwards of $35,000 to install a temporary video screen, audio facilities, and a modern ticketing system, and to hire function rooms and pay the Town of Vincent between $6,000 and $7,000 for parking.

The state government has committed $88 million for the first stage of upgrades at nib Stadium, and seeing those funds make a difference at the park could not come quick enough for Glory chief executive Paul Kelly.

“I welcome the investment, but for me to survive in there I need assistance and help on what it currently costs me,” Mr Kelly said.

“I would prefer to see the government invest some money now in those items that are going to remain there like the video screen, the audio, the ticketing system, items that would be retained anyway in the upgrade. I’d like to see those put in now.

“That would save Glory a fair amount of money, and I’ve pushed that with government, with stadium managers, with local government, with everybody that I can, saying that’s what’s going to have to happen for us to make a profit.”

The infrastructure issues at nib Stadium are not unique to Glory.

“As well as replacing some permanent things such as lights and upgrading the change rooms and the media facilities, we also had to lease grandstands, a marquee and corporate facilities,” Mr Reid told WA Business News.

“That has had an inflating effect on our financial situation.

“We have exactly the same operational expenses that Glory does, but in our case, we were forced to put in physical assets.”

The Force increased the grandstand’s capacity by about 35 per cent, installed a corporate marquee that holds 500, and installed 13 corporate hospitality suites.

On the hardwood floors of Challenge Stadium, the Perth Wildcats have outgrown the venue they moved to after the mothballed and soon-to-be-demolished 8,000-capacity Perth Entertainment Centre proved too big.

In recent years, however, the Wildcats have again been an on-court success, with the 4,500-capacity Challenge Stadium proving inadequate.

Wildcats chief executive Nick Marvin said the team had to cap its membership at 3,600 this year to allow casual fans access to the team’s games at Challenge.

“To be fair to Challenge, the venue was quite appropriate when we moved back from the city,” he said.

“But now, certainly in the last four years, Challenge has been a constraint for us.”

There is hope for the Cats, however, with the team slated to move into the $500 million, 12,500-capacity Perth Arena in time for the 2012-2013 National Basketball League competition.

And it’s this move back to the centre of the city that has Wildcats management thinking big.

“We went from 1,600 members three years ago, so we doubled our membership in three years. The question is whether we can triple that in 18 months.”