Legendary Western Australian sports commentator Dennis Cometti has made an unlikely appearance in a portrait submission for the Archibald Prize. 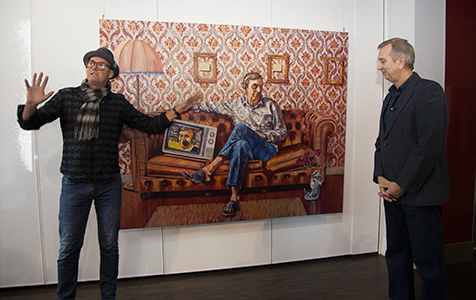 Legendary Western Australian sports commentator Dennis Cometti has made an unlikely appearance in a portrait submission for the Archibald Prize.

The double portrait, titled "Part of the Living Room", shows Mr Cometti lounging on a couch next to a television showing his more recognisable broadcast persona.

Mr O'Connell, who played 20 games for West Coast and was a member of its inaugural squad in 1987, says he had always admired Mr Cometti and had put him at the top of his "wish list" of subjects for the prize submission.

Known for his dry sense of humour and laidback persona, Mr Cometti has become one of the most recognisable media figures in Australian sport over the past four decades.

While best known as an AFL commentator alongside Bruce McAvaney, Mr Cometti has also called three Olympic Games and received a number of awards for his media work.

He played 40 games for West Perth in the WAFL and later coached the team for several years.

The Archibald Prize is awarded annually to the best Australian portrait, "preferentially of some man or woman distinguished in art, letters, science or politics".

Among the prominent Australians to have featured in Archibald-winning portraits in recent years are Perth-raised comedian Tim Minchin, actor Hugo Weaving and painter Margaret Olley.

It also includes a restaurant and studio where Mr O'Connell says the portrait was created.