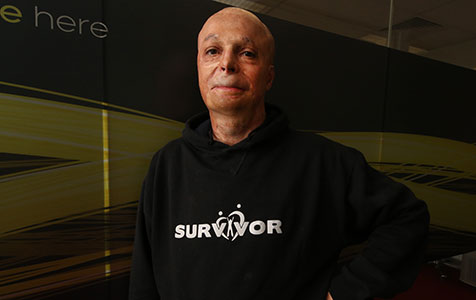 Grazi Lisciotto says the brokers and bankers football match has been a success. Photo: Bohdan Warchomij

Mixing sport and fundraising has proved a winner for not-for-profit groups but the Peter Hughes Burn Foundation has taken the formula past the post to also inspire and motivate beneficiaries of its work.

The foundation, which is named after Bali bombing burns survivor Peter Hughes, raised $15,000 last year from its inaugural bankers versus brokers football match.

The money goes to help burns survivors through the emotional turmoil associated with recovery.

“Once you’re a burn survivor, physically, a lot has been taken away from you, and you can’t do the same things that you used to,” Mr Lisciotto told Business News.

“We’ve showed other burns survivors that ... it’s about having a go, it’s not about sitting at home and being the victim.”

In 2003, Mr Lisciotto suffered severe burns after a  self-harm incident stemming from his battle with depression.

Mr Lisciotto said that while he received a lot of support in his physical rehabilitation, for a long time he was unable to find the assistance he required when it came to his mental recovery.

A few years later, he attended a retreat hosted by the foundation, which was then known as the Burn Foundation of Australia, and was buoyed by how well others were managing to deal with their circumstances.

“I was confused because for three years I was a prisoner in my own home and I saw them (other burns survivors) laughing,” Mr Lisciotto said.

“They gave me a little bit of hope and I kept moving forward from there.”

He began volunteering for the foundation but by 2009 it became clear the organisation was at a standstill and no longer growing.

He accepted and asked that Mr Lisciotto be appointed CEO.

Mr Hughes’ son and general manager of mortgage and financing broking firm Quantum Finance Australia, Gavin Harrigan, struck on the idea of exploiting the rivalry between bankers and brokers in a charitable football match.

Mr Lisciotto said there was a little scepticism at first but after the success of the first event, there had been an overwhelming response from both bankers and brokers, to such an extent that there is now a waiting list for the next game in June.

The money raised from the match as well as other fundraising events organised in the name of the foundation, such as the Cape2Cape run, go towards the retreats.

At the camps burns survivors are able to share their experiences in a supportive environment and they are also able to hear the stories of others.

*data according to last event

Km vary according to weather