Flexibility the key for education

Universities deserve more freedom than they get, especially now as we transition from a mining boom that generated much wealth but left us inefficient. 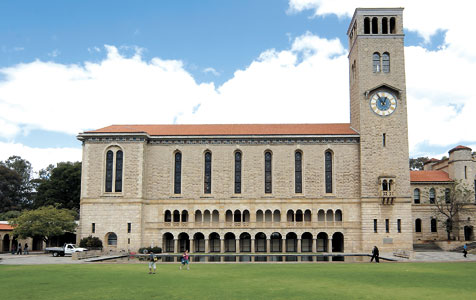 Universities deserve more freedom than they get, especially now as we transition from a mining boom that generated much wealth but left us inefficient.

These institutions benefit from traditions and culture that stem from several centuries of refinement, but they are also restrained by archaic rules and structures that make them vulnerable in an age of technological change.

The economic value of the tertiary education sector is often overlooked or, at best, given lip service.

Universities are the greatest developers of the valuable human capital Australia needs to remain competitive and relevant in the future, and they are also significant export earners in their own right.

Not only do foreign students come here in droves – nearly 30,000 enrolled in Western Australia last year alone – because they value our educational institutions above many others, they learn about our culture and take those lessons home, making it easier for Australians to connect overseas.

But to maintain this important place in the national economy, universities need more flexibility to act like business and differentiate their offering.

At the moment, all universities are corralled in a system that (for political reasons) attempts to homogenise them to a large degree. The problem with that is by attempting create an artificially egalitarian system we increasingly end up with an average one. That serves no-one’s best interests, especially not those of the nation.

The world’s best and brightest, including our own, won’t be attracted by universities that are forced to conform to norms. Just as innovation allows businesses to reinvent themselves, so too must educational institutions be allowed challenge the status quo, even if that means making mistakes.

Intriguingly, the recent criticism over a proposal by the University of WA to establish a branch of Bjorn Lomborg’s Copenhagen Consensus Centre shows how hard it is to be different in that sector, and how academics and students themselves seem to be the most welded to the past way of doing things.

Professor Lomborg is generally described as climate contrarian although, unlike those in the global warming debate who attract most censure from academic circles, he does not dispute anthropological causation of warming but rather the extent to which it is damaging and the way it ought to be tackled. Isn’t that what academics do? Don’t they question things, challenge the status quo, encourage debate and thrust us to the next level?

Later in the year this newspaper will host Barry Marshall, a Nobel Prize winner for medicine. He did all of the above, against the scientific consensus, taking personal risk to confirm his discovery and make the world a better place for a lot of people.

Professor Marshall is a rare breed.

He made his mark in the relative backwater of Perth and has remained in WA.

Such talents are, more often than not, lured overseas by institutions that have far more flexibility in the way they pay staff, charge students and govern their campuses.

If we want to minimise the brain drain and, in fact, encourage the best students to come here, we need to have universities that are regarded as being at the top of their game, globally. We need to allow the universities that want to be in that space the freedom to take calculated risks that will get them there – not just eventually, but sooner rather than later.

As the recent list of top-performing ‘young’ universities shows, Australia has many up and comers that are less than 50 years old. In the main, however, the most highly regarded Australian institutions are much older than that.

Certainly that means Australia has a head start, but modern technology and concerted efforts of countries like China to modernise mean that the future of the traditional sandstone university faces very real challenges.

As for fees and the hyperbole around $100,000 degrees that helped crush support for deregulation, there is a high level of maturity in Australia about the value of a university education.

In general, students know they are more employable if they are qualified. Readers need only see the incomes of Australia’s top occupations – mostly requiring a university degree – to see that even if a degree might truly cost $100,000, it would be worth it for many.

For others, perhaps the value does not exist. Why should the Australian taxpayer subsidise students who are simply biding their time before entering the workforce? If they are doing a degree for personal development, all credit to them, but there is a cost for making such a choice.

Modern technology makes much of these lessons available at the fraction of the cost to the individual or the public.

Of course, not all university degrees are a direct ticket to a high-earning profession. Some provide the background for critical thinking and a better understanding of our world – the kinds of skills many leaders have. Those are exactly the skills required to unlock the value in our university system rather than leave it constrained by outdated ideas that no longer apply.