What makes you tick? I have to say that one of the most important things is my family. 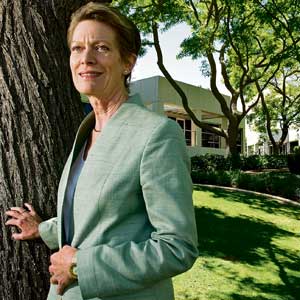 What makes you tick?

I have to say that one of the most important things is my family. It's a very small family, with just my husband and my son, but we're very important to each other and they're my priority.

Do you have any family members in aged care?

From your experiences, what makes a good leader?

I can't honestly say there is one. At the beginning of your career or your time learning your trade, your achievements to others may seem very small, but for you they're big steps forward, and not everybody sees those. Then there are things that happen for which you gain public recognition, whether you seek it or not; public recognition like the Telstra Business Woman of the Year Award, or this WA Australian of the Year Award.

A major setback that's helped you grow as a person?

Life's not that simple. When you're striving to do something or to pursue a certain path, which is something very important to you or is a dream you might have, there are always setbacks along the way. Some are big, some are small, but it's this whole issue of failures. The trick is to recognise them and to make decisions about whether you can fix them or not.

Influence of family on your career?

They have had an enormous influence on me. With my husband, we've both had very busy careers, but my husband has been my source of confidence and encouragement throughout my whole career. We married when we were medical students.

Who has been your mentor?

I started my career before this mentor thing happened. I have heroes, which I suppose is a different way of saying the same thing. I firmly believe that you need to continue to learn at the feet of people who know more than you do - always. I don't have a particular mentor, I just learn from the rest of the world as much as I can.

"First of all it was a big surprise; second of all, it's the most incredible privilege and honour of my life."

As one of the most highly decorated medical specialists and business people in Perth, Penny Flett says being named WA Australian of the Year 2009 last week was a defining and humbling moment.

After 25 years in the aged care sector, the specialist in geriatric medicine has a vision for an Australia that once again values its elderly and respects their wisdom and experience.

Dr Flett began her career after graduating in medicine from the University of Adelaide, where she met husband Peter Flett, who was appointed director general of the Department of Health in October this year.

As chief executive of Osborne Park-based residential aged care provider Brightwater Care Group, Dr Flett sees the hardships of a generation she feels is often forgotten, in a sector she knows is frequently neglected.

The former president of the Chamber of Commerce and Industry WA assists in the provision of residential and at-home services for elderly and also young people "who have suffered some catastrophic event".

Over the years she has contributed to many boards and associations and is currently chair of the WA Aged Care Advisory Council, which provides advice to the state government on health and related aged care services for older people.

In this role, Dr Flett oversaw the development of the State Aged Care Plan - a blueprint to guide the evolution of health and geriatric care services for Western Australia's elderly.

Earlier this year, her work to dispel stereotypes of old age and shift deep-seated cultural attitudes was recognised by her industry peers when she was given an award of excellence for her services to the aged care industry.

"I've worked hard to transform the organisation I work for, along with all of my contemporaries, from the old traditional not-for-profit way of doing things to transform our organisation into a very modern organisation which embraces good business practice, but still remains true to its mission to provide services to people who are very old and frail," Dr Flett said.

As the former president of CCIWA, Dr Flett has been able to draw on her experiences in the commercial world and transcend them into the not-for-profit sector.

"Not for profit is a very difficult term. It's a traditional term; I mean, we're not for loss either," she said.

"We have to organise our business practice so that we are sustainable into the future like every other organisation, so we have to be very modern and contemporary in that sense.

"Our raison d'être is different than that in the commercial sector. The not-for-profit sector is much more complex than the commercial world and it's very challenging to remain true to a mission and yet behave in a modern, businesslike way.

"My time as president of CCI has been a remarkable time. I think for me, I have come to know an enormous range of businesses, large businesses, very large, medium and small, so that's been the privilege of my presidency.

"But I have also felt that I have been able to put the not-for-profit sector firmly in the place of business."

Dr Flettt said working to help the elderly was an emotional career path, but she had never become consumed by her passion.

"I come to work very early and I leave work at a civilised hour because home is a great priority for me, so I'm usually gone by 5.30pm or 6pm, but might be here until 7pm," she said.

"I don't take my work home with me if I can possibly help it because otherwise work overwhelms your life. I do defend my home life; I don't have a laptop but I'm always accessible."

Dr Flett spent several of her career's early years in a variety of locations performing a variety of medical roles, including four years at the Royal Australian Air Force.

In 1974, Dr Flett became the first woman in peacetime to hold the rank of flight lieutenant and was also the first female doctor to serve in the RAAF.

Through the 1970s and 1980s she pursued post-graduate qualifications in both geriatric medicine and medical administration, becoming a champion for people of all ages who require a high level of ongoing support.

In 1998, Dr Flett was named the Telstra Australian Business Woman of the Year and was awarded the Centenary Medal in 2003.