Scott Morrison says he has high expectations for his new ministry, with Western Australians Christian Porter, Linda Reynolds and Ken Wyatt among those to be promoted. 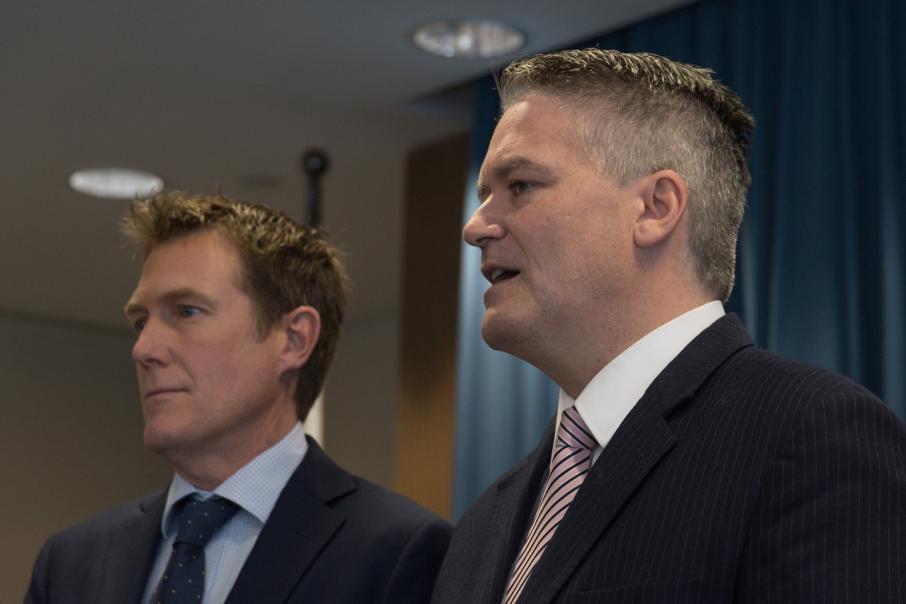 WA MPs Christian Porter (left) and Mathias Cormann will remain in the ministry.

Scott Morrison says he has high expectations for his new ministry, with Western Australians Christian Porter, Linda Reynolds and Ken Wyatt among those to be promoted.

"I have ... clear goals for each of their roles," the prime minister told reporters in Canberra on Sunday.

"This will include congestion-busting on regulatory and bureaucratic roadblocks, making better use of technology, and better integrating service delivery across portfolios."

He also wants to make it easier for Australians to deal with and access government services.

Mr Robert was assistant treasurer but has been promoted to cabinet as government services minister and will oversee the National Disability Insurance Scheme.

He will also have responsibility for Service Australia, a new agency to make it easier for citizens to use government services.

Mr Hawke will be international development minister and assistant defence minister, in a bid to build stronger defence and economic ties in the Pacific.

As expected, former environment minister Melissa Price - who had been unable to comfortably answer media questions about her portfolio - has been demoted from cabinet and will now be defence industry minister.

"Melissa and I discussed her role. She asked to be given a new challenge and I was pleased to give her one," Mr Morrison told reporters in Canberra on Sunday.

In her new role, Ms Price will work with another Western Australian, Linda Reynolds, who will be defence minister.

It's a return to cabinet for Ms Ley, who in 2017 was forced to stand down as health minister after revelations she purchased a Gold Coast apartment while on a work trip.

Former assistant treasurer Michael Sukkar, who quit his job in a bid to get Peter Dutton into The Lodge, has been put back in the role to oversee the first home loan deposit scheme.

Nationals MP David Littleproud has been given water resources, natural disasters, and emergency management, while Bridget McKenzie will become Australia's first ever female agriculture minister. Both will be in cabinet.

Alan Tudge will be population minister, while Richard Colbeck will take aged care, youth and sport.

Victorian senator Mitch Fifield will quit the Senate and go to the United Nations as ambassador, after asking to leave.

Paul Fletcher will take over as communications minister, and he said his priority was to complete the NBN rollout.

NSW senator Arthur Sinodinos will replace Joe Hockey as ambassador to the US.

Among the Western Australians, Mathias Cormann stays on as finance minister, Michaelia Cash will get employment and skills, but Attorney General Christian Porter will take over her responsibility for industrial relations.

Two other Western Australians have been given junior ministerial roles.