THE Fishing Industry Women's Association of WA (FIWA) is poised to take a class action against the state for changes to the rules governing the rock lobster industry. 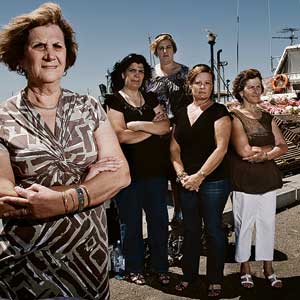 THE Fishing Industry Women's Association of WA (FIWA) is poised to take a class action against the state for changes to the rules governing the rock lobster industry.

About 200 people protested outside Parliament House this week opposing the changes and calling for compensation, saying alterations to pot limits and other restrictions, such as days allowed on the water, were causing financial hardship among local fishermen.

She said members were angry about the lack of recognition evidenced by Mr Barnett's remarks, particularly considering it was an independent, non-government incorporated body, which had not received government assistance in the past.

"In what appears to be an attempt by the premier to discredit the association in the lead-up to the rally, he made some very insulting remarks that were shown on TV," Ms Goncalves said.

She said the association wrote to Mr Barnett on February 17 requesting a financial assistance package to help fishermen who had been negatively affected by the changes to the lobster fishing regulations.

On February 29 the association contacted the premier's office and Ms Goncalves said it was told that Mr Barnett was handling the letter "personally". FIWA said it was yet to receive a response.

"At the time of making these [disparaging] remarks the premier had the association's letter in his possession," Ms Goncalves said.

"The members of the Fishing Industry Women's Association (WA) are business people in their own right.

"They are owners or part-owners of fishing boats and licences and are actively engaged in the business of fishing in an administrative capacity.

"The premier's attack on this association is seen as sexist and insulting not only to women in the fishing industry but to all business women."

Attempts by WA Business News to contact Mr Barnett this week were unsuccessful.

FIWA treasurer Jannifer Pearce said the not-for-profit organisation, which has about 60 members, survived on membership and had not had government assistance since its inception in 1992.

"With all the problems the fisheries industry is having, membership has doubled in the past six months though," she said.

FIWA was a founding member of the Western Rock Lobster Council.

It was formed in 1992 after the government of the day introduced a management package that FIWA said lacked sufficient conservation.

In the late 1990s, the association became more of a networking system for women in industry. During that time, while no major concerns in the sector existed, members became less active in management issues.

Ms Pearce said it was only when the consultative process with government broke down or industry concerns were ignored that the association became involved politically.

She said the association was established to promote the consideration of social and family interests in the management of the fishing industry of WA, actively participating in the management and conservation as to limit the impacts on families in the sector.

"While the association, on occasion, has lobbied government ministers in the interests of members, it is not a lobby group, but rather an independent incorporated body which represents women in fisheries within policy-making and decision-making bodies at federal, state, and regional levels," Ms Pearce said.