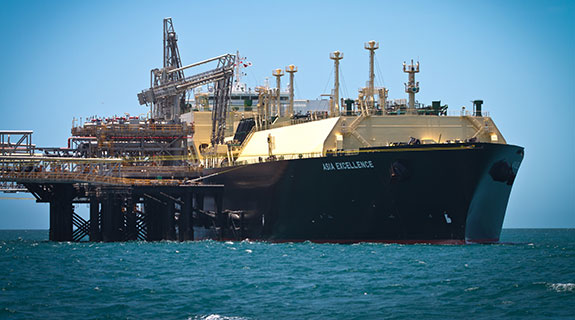 The LNG cargo was loaded over the weekend onto the Asia Excellence, one of Chevron's new LNG carriers.

The US energy giant said two weeks ago that the first shipment was due “next week” and did not explain the small slippage in its timetable.

The first shipment came six-and-a-half years after Chevron and its joint venture partners committed to proceed with the giant project, which initially was expected to cost $43 billion and ship its first cargo in 2014.

The initial cargo will be delivered to one of Chevron’s foundation buyers, Chubu Electric Power, for delivery into Japan.

Chevron executive vice-president Mike Wirth said departure of the first cargo was a key milestone in the company’s commitment to be a reliable LNG provider for customers across the Asia Pacific region.

“This is also important for our investors as we begin to generate revenue from a project we expect will operate for decades to come,” he said.

The LNG cargo was loaded over the weekend onto the Asia Excellence, one of Chevron's new LNG carriers.

Chevron’s shipping company is in the final stages of adding six new LNG carriers to its operated fleet, to support exports from projects including Gorgon and Wheatstone.

“Both projects will continue to deliver significant long-term economic benefits and energy security for Australia for decades to come,” he said.

Premier and State Development Minister Colin Barnett welcomed the first shipment, saying Gorgon was one of the most ambitious projects ever undertaken in Australia.

“The project is the largest single resources project in Australian history, and is also one of the largest natural gas projects in the world,” Mr Barnett said.

“To date, more than $34 billion has been invested within the state and Australia, and 455 contracts have been awarded to Western Australian companies for goods and services.”

The premier said the project would continue to generate economic benefits for WA over the next few decades.

“As the project moves into production, its longstanding benefits include operational and maintenance jobs, the provision of domestic gas and the payment of state taxes,” he said.

Chevron Australia estimated that the project had created more than 10,000 jobs during construction, the majority of which were created in WA.

Chevron and its contractors still have 6,500 workers on Barrow Island, indicating the scale of the work ahead.

Construction of the second and third LNG trains is still under way, with train 2 due to be completed in about six months, and train 3 in about 12 months.

The ramp-up to full production on each LNG train normally takes six to eight months, but Chevron is targeting a faster ramp-up as it applies lessons learned.

That suggests the plant is expected to reach its full capacity of 15.6 million tonnes of LNG per year after the middle of 2017.

As well as producing LNG and condensate for export, Gorgon will be a major supplier of gas for the domestic market.

The first domgas plant, with output of 150TJ/day, will commence in 2016, with a further 150TJ/day to follow when there is sufficient demand.

The long-term number of operational staff will be about 350, though the project will employ more during shutdowns and maintenance.

Gorgon is part of a wave of big gas projects around Australia that collectively cost $200 billion and are expected to make Australia the world’s largest LNG exporter.

The wave of new LNG production is set to continue, as Gorgon completes its second and third LNG trains and the Ichthys, Wheatstone and Prelude floating LNG projects reach completion.

Collectively, Australian LNG producers will export just more than 85 million tonnes per year, assuming all of the new projects reach full output around 2020.

The projects have also left Australia with a reputation as a high-cost jurisdiction.

Combined with weakness in oil and gas prices, it is unclear when the next big LNG development will proceed, with even Woodside Petroleum’s Browse FLNG looking uncertain.