Increased regulation and flexible zoning laws were two of the innovative ideas put forward at a conference on Perth’s development. 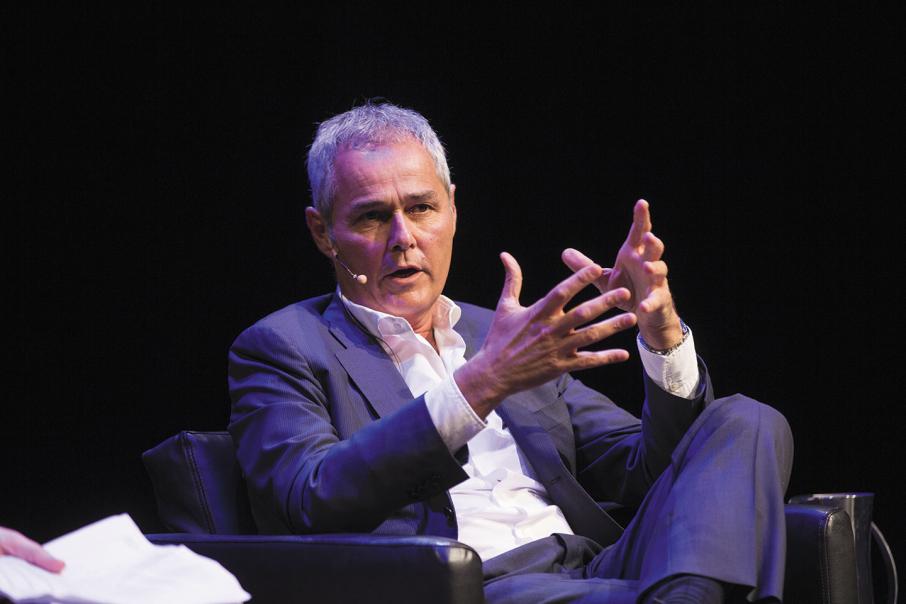 Adrian Fini says he would be happy with more regulation. Photos: Attila Csaszar

Calls to cut regulation and red tape are often the first item of business for those promoting developments in the world’s major cities, but not Perth’s Adrian Fini, who sees things very differently.

The man behind the State Buildings project told last week’s Remix Academy conference that Perth could learn something from Italy.

“There is a system there to keep community and culture in play,” Mr Fini said.

“A lot of controls are required to make it happen.

“It keeps the rents corrected, it stops extortion (by landlords).

“Some councils have a few of those policies, they are actually logical because they are the areas we like – Leederville and Fremantle at the moment.

“It will turn into an air-conditioned shopping centre if you let it.

“So I’m happy if there is more regulation.”

He gave a small example from Rome to illustrate what was possible.

“You can go to the main square in the most expensive part of Rome and you still see 10 ladies making shirts,” Mr Fini said.

“It still happens, but it won’t happen in St Georges Terrace.”

Mr Fini said his approach was not at odds with making money; he believes it would actually help.

“In all the projects we do, we try to develop an urban, cultural and social agenda, both for the project and the areas outside of it,” he said.

“We do it for absolute financial reasons.

“We’re a long-term property owner; we benefit and the community benefits.”

The Fini Group director was speaking at Perth’s first Remix Academy, jointly presented by the City of Perth and the Chamber of Arts and Culture.

Andrew Kalish, director of cultural development for the Downtown Brooklyn Partnership, told the conference many cities were facing the same challenges. 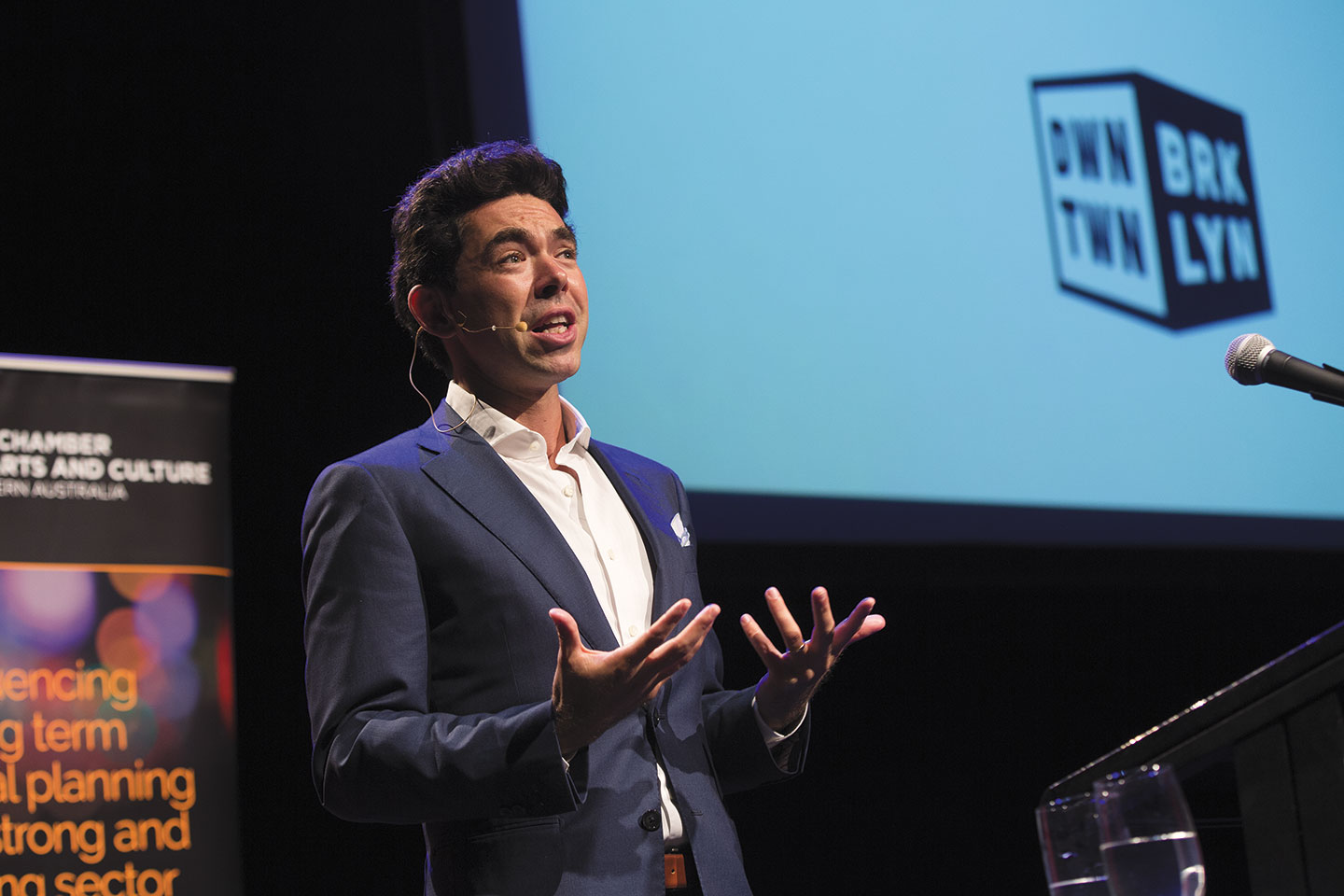 Andrew Kalish says cities around the world are grappling with the same issues.

“With that came the idea of how do you keep Brooklyn as Brooklyn?” he said.

“How do we not just have luxury residential and retail?

“That’s where the idea of playing to your strengths comes in.

“It’s not about building your way out of this predicament; it’s looking at assets you have already in the city and doubling down on that.”

One example in Brooklyn was reusing old buildings instead of constructing something new.

“Instead of building a bunch of venues, we wanted to weave a cultural district into the fabric of the community,” Mr Kalish said.

He said Brooklyn used private money, for instance to fund the development of a network of streetcars.

It also had a focus on mixed land uses.

“All these buildings have residents in them, cultural institutions in the base, and retail as well as commercial, so it’s a real 24-7 community,” Mr Kalish said.

He contrasted that to cultural centres that are desolate when the museums and art galleries are closed.

“The idea here was to make sure that never happened,” Mr Kalish said.

He said developers were granted zoning concessions, allowing them to go taller, if they supported the city’s goals.

Mr Kalish cited the example of one developer who bought an entire city block.

“They restored a historic building and gifted that to a cultural institution, built two public schools, plus commercial offices, plus 30 per cent affordable housing, plus retail and public space,” Mr Kalish said.

“They are doing this because of this incredible mash-up we’ve created, by leveraging the assets already in the neighbourhood.”

Mr Fini told the conference better utilisation of government land and buildings would be a smart way to help the cultural sector, while also helping city development.

“People want to be around talent and creativity, and the more that you can put that in a denser environment, the more success you’re going to have,” he said.

“I think it’s about government, local or state, or private enterprises saying, ‘what space do we have; what can we give them (creative organisations)?’

“I’m certain the land and the spaces are available in government hands.”

Mr Fini said this could also improve the allocation of Lotterywest grants to service providers in the community sector.

“I think roughly 38 per cent of that funding ends up being spent on capital,” he said.

“That just tells me there are too many photocopiers and hard walls in the wrong places.

“If you can change that model, then it should come out at about, we think, 10-12 per cent if you look at occupancy costs in a normal industry.

“So it’s a quick win to get 50 per cent more output by just looking at the way you work.”

This included inviting universities and college to lodge proposals for a derelict hospital on Roosevelt Island.

“And Cornell (University) partnered up with Israel’s Technicon University, which is one of the top tech universities on the planet, and now they’re going to have a $US6 billion campus there by 2025.”

“That’s all just because they gave away land that they (the city) weren’t doing anything with,” Mr Kalish said.

“That has been an incredible model for the city because they realised, yes, you might lose a little bit on rent on land costs, but long-term value to the taxpayers says how that’s amplified by giving away half a block of city land; it’s exponential.”

Mr Fini said the Second Home co-working spaces in several cities around the world were the type of initiative that could support a thriving city.

Portugal’s capital, Lisbon, is an example of a city that has repurposed idle space – the old food market warehouse – to provide a location for its Second Home.

Second Home has a similar model to Perth’s Spacecubed, though arguably with a sleeker aesthetic and a design that encourages socialising with likeminded peers – including an upstairs bar and leisure space.

Mr Fini’s current projects include an apartment tower at Elizabeth Quay, which will include an art gallery and lookout as a beacon for Perth.

“We look at the shortcomings of the city, and ask what we can do where everyone wins,” Mr Fini said.

He has also been a driving force behind the Historic Heart project, which is trying to revitalise the eastern end of the CBD adjacent to the State Buildings development.

“We’re trying to correct an issue and stimulate an opportunity.”

Mr Fini acknowledged that his ability to work on projects like this was helped by not being part of a listed company.

“We’re developers who are retired and having some fun.”