Sending artworks on the long trip across the Nullarbor Plain or on a precious cargo flight may have traditionally been the path for Western Australian art collectors hoping to cut a deal. 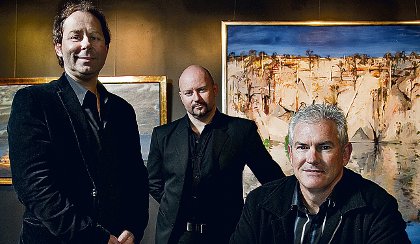 Sending artworks on the long trip across the Nullarbor Plain or on a precious cargo flight may have traditionally been the path for Western Australian art collectors hoping to cut a deal.

Now, there’s a new art dealer in town, which aims to make it easier for local collectors to buy and sell their works nationally.

The Collector’s Room in Shenton Park is a joint venture between Subiaco gallery owners Linton Partington and Gary Kay, of Linton & Kay, and Robert Buratti, who recently launched his business, Robert Buratti Fine Art, after leaving his role as director at Perth’s United Galleries.

The business is based on secondary art sales, works that are not new to the market, and was built with the major goal of offering collectors in WA the ease of buying and selling works, avoiding high costs associated with dealing with auction houses based in the eastern states.

“It was set up to give local collectors an opportunity to sell their work … but we are finding eastern states dealers are bringing work to us here to sell in WA,” Mr Buratti said.

“It wasn’t really a goal of the business per se, the initial thought was, we know there is amazing work in WA already, it was really just giving those collectors a local option to move that work rather than always go to Sydney or Melbourne.”

Mr Kay said the WA market was more buoyant and therefore was becoming attractive for dealers and collectors based on the east coast.

The Collector’s Room only opened its doors in May, but Mr Partington said the art that has been surfacing has shown there was a need for the business.

“It is amazing what is coming out of the woodwork,” he said.

The partners established business with the aim of focusing on collectors, not artists, Mr Buratti said.

“This is more about making sure the client is looked after, it is about them and their collection and what works for them as opposed to what is working on the other side,” Mr Buratti told WA Business News.

The business was built to cater for an anticipated market – the time-poor professional who appreciates art – and is centred in a private location for viewing works from prominent artists such as Arthur Boyd, James Gleeson, Tim Storrier and Brett Whiteley.

Mr Buratti said building an extensive client base was a crucial element in forming a dealing business. The Collector’s Room’s mobile application and online presence had also helped to grow its client base. “It is a big goal and it takes years and years,” he said.

“We are getting a much wider spectrum of clients than what you would have sitting in a corner gallery waiting for someone to come in.

“Technology is the best tool in terms of reaching people, maintaining relationships, getting access to stock and showing people artwork … the phone is becoming the gallery more so than the physical space.”

The app has an artwork evaluation capability, where users can upload pictures of a work and request an evaluation – an element Mr Buratti said was also helping to quickly establish the business and connections to its client base.

“We are building up a database and getting a lot of interstate registrations coming through the app,” he said.

“Essentially, we are building up this big beautiful database of art, clients and prospective clients looking to buy and sell.”

The business is also careful about choosing which works to take on consignment, reflecting the needs of its clients.

“What we are really going for is quality … when people come to see works they need to feel we aren’t wasting their time and showing them things that have bounced around auctions forever and just wouldn’t make the grade in a good collection,” Mr Buratti said.

“The worst thing would be if it just became a dumping ground because then you cease to be in the art-dealing business and you start to become the art-storage business.”