Apartment developer Finbar Group says it has completed its $75.6 million Arbor North project in Rivervale on time and budget, with $54.6 million in sales received to date. 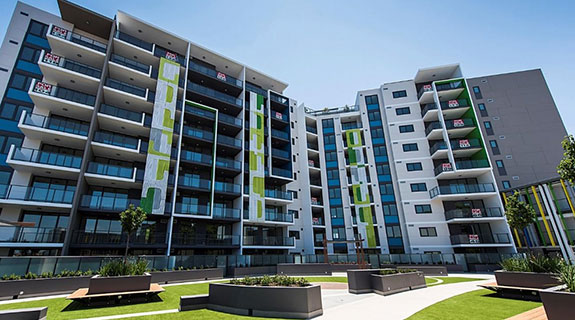 Apartment developer Finbar Group says it has completed its $75.6 million Arbor North project in Rivervale on time and budget, with $54.6 million in sales received to date.

Arbor North, located on the corner of Rowe Avenue and Riverside Road, forms part of The Springs precinct and consists of 154 one and two-bedroom residential apartments, with amenities including a swimming pool, pool deck with outdoor barbecue facilities, gym, sauna, residents lounge, games room and rooftop gardens.

Finbar has secured $54.9 million in sales from the project, with 40 apartments still up for grabs.

Settlement on the pre-sold apartments is expected to begin next month, with revenue expected to contribute to Finbar’s first-half earnings for the 2016 financial year.

“We have successfully completed Arbor North on time and budget with 74 per cent of apartments pre-sold, which is our second project at the Springs precinct after the completion of Spring View Towers 13 months ago,” Finbar managing director Darren Pateman said.

“The two projects comprise 342 apartments in The Springs precinct which, combined with other residential and hotel development activity, is really taking shape and becoming a very desirable residential location.

“We currently have four more residential developments planned within The Springs precinct, the next of which will comprise 183 one, two and three bedroom apartments and seven ground floor commercial lots which we plan to launch in 2016.”

The Springs precinct is being delivered by LandCorp and the City of Belmont for the state government.