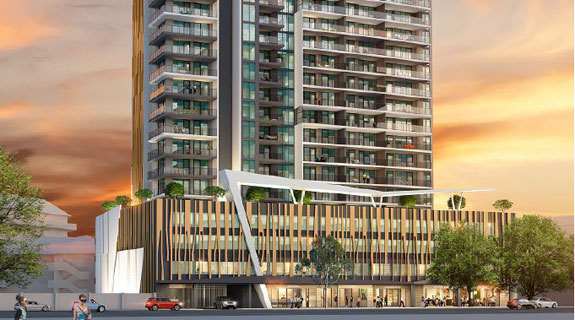 An architect's rendering of the 63 Adelaide Terrace project.

Apartment developer Finbar Group will launch sales early next year for a $162 million, 247-dwelling project at 63 Adelaide Terrace, after receiving planning approval for the project yesterday.

The City of Perth development assessment panel issued its approval for the 33-storey project yesterday.

The developer will receive 50 per cent of the project’s profits plus a management fee.

Managing director Darren Pateman said the eastern end of the city was poised for an exciting transformation, with significant investment to take place at the Waterbank precinct, being developed by Lendlease.

“This includes links to the new Perth Stadium which will create increased vibrancy, food, entertainment and general amenity to all local residents,” he said.

Mr Pateman said the building, designed by SS Chang Architects, would also be a good addition to the East Perth skyline.

“It will provide future residents with a first mover advantage and allow them to gain early access to a property in a vibrant location with a free bus ride into the CBD only 1.5 kilometres away,” he said.