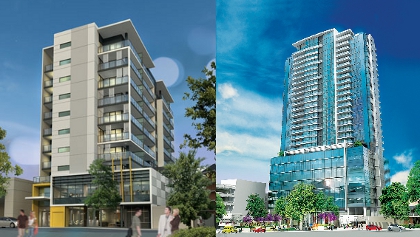 Artists impressions of Finbar's 18 on Plain (L) and Fairlanes developments in Perth's CBD.

Apartment developer Finbar Group has upgraded its profit forecast for the 2012 financial year by nearly $4 million, on the back of strong performances at its 18 on Plain and Fairlanes developments.

Finbar announced today it expected to rake in $28 million after tax for the year ending June 30, up from its previous guidance of $24.03 million.

The upgrade does not include expected revenue from Finbar’s Pelago West development in Karratha, with first settlements from that project expected in July.

“Finbar stands to benefit substantially from improving economic conditions and the realisation of our first investment in the Pilbara early in the next financial year,” Mr Pateman said in a statement.