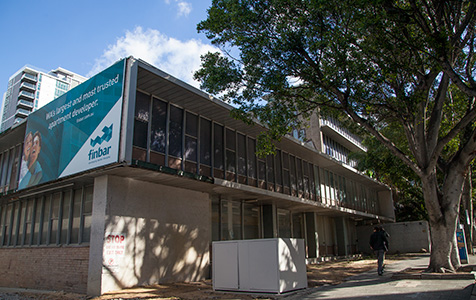 The former ABC studio in the foreground would be retained but Finbar wanted to demolish the adjoining administration building.

Apartment developer Finbar Group is reassessing plans for a $175 million, 31-storey residential tower on Adelaide Terrace after being told it could not demolish a heritage-listed former ABC building.

The City of Perth's Development Assessment Panel members voted unanimously at a meeting last night to move a recommendation that Finbar's proposed development should be refused.

"In the end, the result was disappointing, but not unexpected," Mr Pateman said.

"We believe it would have been a good outcome for the site, the arts community and the state but we will now consider our options in consultation with our JV partners."

Finbar had proposed to conserve the $8 million Basil Kirke studio and gift it to a trust, as well as spend $1 million to refurbish it and create four studios for WA's performing arts and music community to use.

However it argued it was not feasible or prudent to restore or retain the adjoining administration building because of the significant works and cost required to bring it up to current building, health and safety codes.

Rowe Group principal and managing director Greg Rowe, who represented Finbar at the DAP meeting, said the developer had not tried to abdicate its responsibilities under the heritage listing.

Mr Rowe said as plans developed, the need to make changes had occurred and Finbar now felt it was not feasible or prudent to conserve the administration building as it had originally agreed to in 2010.

DAP deputy presiding member Brian Curtis said the decision to deny the proposal hinged on what the panel saw as a lack of alternative assessments to Finbar's assertion that demolishing the administration building was the only feasible and prudent course of action.

"My sense is you've done a lot of work to make this building work, but on the assumption that (the administration) building goes," Mr Curtis said.

Finbar struck an agreement in 2010 to develop the 6,303 square metre site with Ventrade, five years after ABC vacated the 1960s-era buildings.

It spent six months in consultations with the City of Perth eventually agreeing to a plan to maintain both the ABC administration building and Basil Kirke studio.

The old ABC site was recognised by the Heritage Council of Western Australia in 2007 as having cultural heritage significance due in part to its post-war international style and its historic value related to the growth of the ABC as a broadcaster.

It was the place the ABC joined radio and television broadcasting and recording, and music recording together for the first time in WA.

Under Section 34 of the Heritage Act, had the proposed development been approved, Finbar would still have to get ministerial approval to demolish the heritage listed site.

Mr Curtis said he would have preferred if discussions continued between the developers, the City of Perth and the Heritage Council, instead of the case coming to DAP.

"What concerns me about this one is this feels like it's gone off the rails to a point to me, where it looks extremely difficult to retrieve," he said.

"This has been a challenging application in many respects but what I'm aware of is that there is a lot of experience in this room as to how these kinds of developments can actually be made to work."