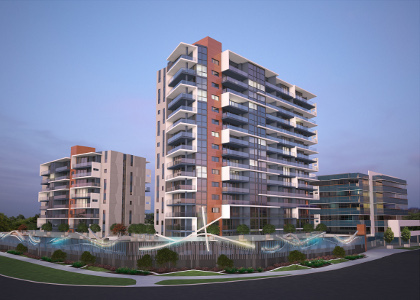 An artist's impression of the completed Finbar development at Springs Rivervale.

Finbar Group has announced it will construct a $128 million, 188-apartment and office complex at LandCorp's Springs Rivervale redevelopment site.

Finbar said today that it had received development approval to build a residential complex comprising a 16-storey tower and an 8-level building at Springs Rivervale, while a six-storey, 6,250 square metre office building was also approved.

The residential complex will comprise a range of one, two, and three bedroom apartments, and the entire development is expected to be complete by 2015.

FInbar, which led a joint venture to purchase the 7,441 square metre site located on the corner of Great Eastern Highway and the Graham Farmer Freeway, said the development would become the gateway to the Springs Rivervale redevelopment.

“The whole Burswood precinct will be transformed over the next four years and the Springs is a key element with this renewal process,” Mr Pateman said in a statement.

“Our apartments will offer views of the river and city and their proximity to public transport, access to the CBD, the airport, and major arterial road systems will make this a very convenient and accessible development.

The 14 hectare Springs Rivervale redevelopment precinct, located across the Swan River from the Peninsula golf course in Maylands and adjacent to the Graham Farmer Freeway and Great Eastern Highway, is being managed by government agency LandCorp.

LandCorp's development plan calls for a mix of medium to high density housing to provide more than 1,000 dwellings along with office and commercial buildings.