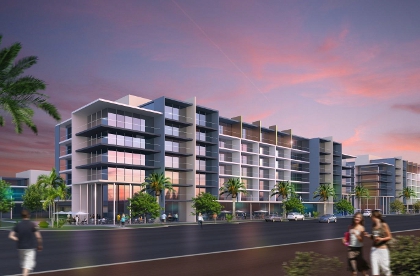 The project is planned for a 3.15 hectare site on Sutherland and Morgans streets, which was formerly home to the Port Hedland Regional Hospital.

Finbar’s proposed development will included 367 short stay serviced apartments, as well as what the company describes as a “considerable” number of commercial office and retail units on the ground floor.

The company expects to proceed to market and begin construction on site early next year.

About $152 million of state funds has been injected into the marina and tourism precinct, which the government stipulated required office and retail units to be included in the apartment complex development.

That project, announced last year, is costing a total of $125 million.

Finbar managing director Darren Pateman said being named the preferred developer of the hospital site was a strategic win for the company’s plans to expansion in the north west.

“Port Hedland represents a significant opportunity for Finbar and allows us to demonstrate further innovative housing in the Pilbara area,” he said in a statement.

“The Spoilbank Marina project itself will be a milestone for the Port Hedland area and will provide real relief to local residents and businesses that are crying out for alternative recreation and accommodation options.”

Finbar has recently completed development of 114 apartments in the Pilbara town of Karratha – the Pelago West project – and has begun work on its next Pelago East project, which will provide 184 apartments.

Mr Pateman said there was pent up demand for cosmopolitan living.

“We believe that Spoilbank Marina will become the prime Port Hedland location…ideally it will enliven the Port Hedland community and become a destination which workers would prefer to call home,” he said.