Apartment developer Finbar Group is planning to revise its Civic Heart project in South Perth, after agreeing to purchase a neighbouring property that includes the heritage-listed Australia Post building on Mill Point Rd. 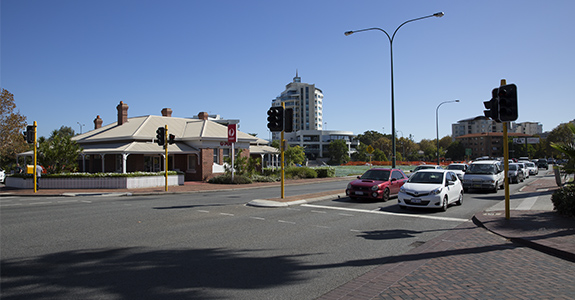 Apartment developer Finbar Group is planning to revise its Civic Heart project in South Perth, after agreeing to purchase a neighbouring property that includes the heritage-listed Australia Post building on Mill Point Rd.

The 1,019 square metre site, which Finbar plans to buy for an undisclosed sum, adjoins the 7,206sqm Civic Triangle site, where the developer has plans for a 30-storey tower above retail and commercial space.

Local residents have expressed concern about the number of high-rise apartment projects earmarked for South Perth, with a cluster around Mends Street and Labouchere Road.

As Business News reported last month in South Perth vision taking shape, six apartment projects have been approved, with the tallest being 39 storeys, and more are in the pipeline.

The apartment developments are expected to support future development of a train station at South Perth.

Finbar managing director Darren Pateman said the purchase of the site at 103 Mill Point Rd would make a big difference to its plans.

“It is the final piece of the jigsaw puzzle that enables us to achieve a better architectural and development outcome for the whole of the Civic Triangle site,” he said.

“This allows us to become more sympathetic and cohesive in the way the heritage buildings are included in the new development design and enables us to include the existing Australia Post heritage building in a manner that makes it part of the new Civic Heart retail precinct rather than leaving it as a separate and fenced-off stand-alone building.”

The benefits also include a broader Mends Street retail frontage.

Australia Post has leased back the heritage building and will continue to operate during the redevelopment and for a period of at least seven years.

Settlement for the land is contracted to occur in July 2015.

Finbar’s development application for the Civic Triangle site is currently being considered and is expected to be ruled upon this month.

The site already included the heritage police station building, which had been earmarked for a cafe.