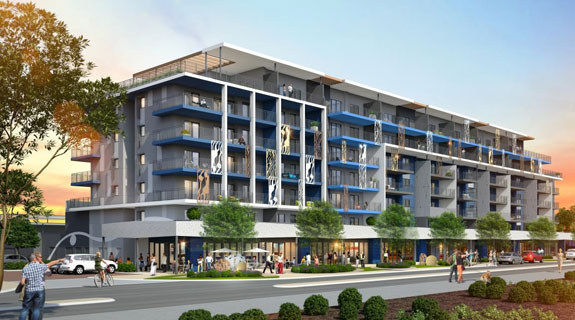 An artist's impression of the first stage of Finbar's Port Hedland proposal.

Finbar Group is advancing long-running plans to build a $390 million apartments and office project in Port Hedland, unveiling a staged proposal despite significant headwinds for property development in the Pilbara town.

The apartments developer said it had finalised a near-$6 million deal to buy the 3.15-hectare former Port Hedland Hospital site from LandCorp, however the transaction will only proceed if it achieves a pre-sales target and wins development approval.

A development application will be lodged immediately for the first stage of a project that will ultimately have an end value of $390 million, comprising 109 apartments, five commercial tenancies and a cafe fronting Sutherland Street.

A further three stages will be subject to market conditions, adding 441 residential apartments, 163 short-stay apartments and an extra 1,646 square metres of commercial space.

The project has been in the pipeline in various forms since July 2012, when Finbar initially planned to build 367 short-stay apartments and 3,900sqm of commercial space.

But construction on that proposal never started, due to concerns of the impacts of dust emissions from nearby mineral stockpiles.

Early last year, Finbar announced it was revising its plans, obtaining ministerial approval to build more than 700 apartments and 10-level office tower on the site, which is also near Port Hedland’s town centre and overlooks the proposed Spoilbank Marina precinct.

That project has also been delayed because of the dust concerns.

In February last year, the Environmental Protection Authority said the marina plan was unacceptable because the findings of a study into the potential health impacts of dust exposure had not been released.

Dust monitors were installed at the site for a minimum of 12 months in December 2013, while LandCorp also began exploring other options for a Port Hedland marina in July through last year, at Cooke Point, with the health risk assessment to be released by mid-2015.

The state government has committed $112 million to the development of the marina, while the Town of Port Hedland has agreed to pitch in $40 million.

Finbar Group managing director Darren Pateman said the current economic climate in Port Hedland meant the company had an opportunity to participate in a market absent of competition.

“Undoubtedly, we are operating in a different economic and market environment to when we first looked at the project,” he said.

“However, with the benefit of a market acceptance clause and an attractive purchase price, we will be able to offer affordable one and two-bedroom product to a local community that has been supportive of the project concept and still has a core need for convenient, well-located, low maintenance accommodation for the local residents and service providers’ operational workforce.

“Our final negotiated position allows our company to seek development approval, and proceed to settle and develop the land only if we can achieve pre-sales that suitably de-risk and underpin the land purchase and project viability.”