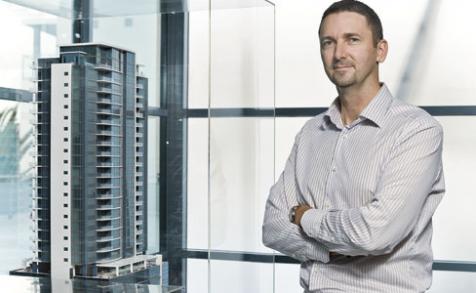 Finbar managing director Darren Pateman with a model of one of the company's previous developments.

Apartment developer Finbar Group has unveiled plans for a third joint venture with Singaporean-owned developer Ventrade Australia - a $183 million project in the heart of Maylands.

The project will comprise 336 new apartments and 2,100 square metres of office space at the Ross's Auction site, bounded by Tenth Avenue, Kennedy Street and Railway Parade.

Finbar has entered a development agreement with the owner of the site, Ventrade Maylands, a subsidiary of Ventrade Australia, which is part of the Singaporean industrial conglomerate Chuan Hup Holdings.

Under the agreement, Finbar will purchase the land for $16.7 million and redevelop the site, earning a management fee, while Ventrade and Finbar will share equally in the development profits.

Finbar said it had joined forces with Ventrade successfully in 2008, with the acquisition and ongoing redevelopment of the 1.28 hectare former ABC site in East Perth.

The developers suffered a setback at the ABC site last month after the City of Perth's Development Assessment Panel would not allow demolition of part of the heritage listed former ABC studios.

Design works are under way with Finbar aiming to gain approval and formally launch marketing for the Maylands project early next year.

The development will have an approximate end value of $183 million.

"We have conducted feasibility work on this particular site a few times over the years so I am very pleased we were able to conclude a purchase contract with the owners and that our partners were able to respond quickly to our proposal to acquire the site and join us again on another development," Finbar managing director Darren Pateman said in a statement.

"It is a substantial sized block with scale benefits that we intend to pitch as a medium cost project which we are most comfortable will be a success."