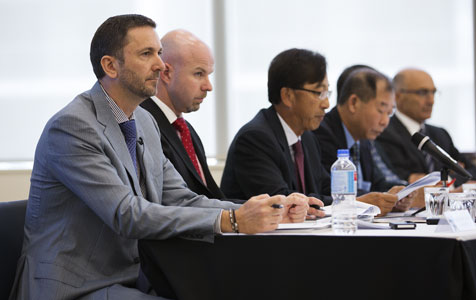 Darren Pateman (left) and the Finbar board of directors at the company's annual meeting last year.

Finbar Group is planning a $60 million luxury apartment project at a newly-purchased property on Great Eastern Highway in Belmont.

Perth’s leading apartment developer said today that its wholly owned subsidiary had paid $6.4 million for the development site, which is located at 239 Great Eastern Highway.

Finbar said plans were under way create a mixed-use complex with 150 apartments and two ground floor commercial units, with an end value of around $60 million.

The transaction is expected to settle in August, with marketing to begin late next year.

The project is expected to contribute to Finbar’s revenue in the 2017 financial year.

“Our company is very enthusiastic about the exciting potential to offer a luxury 10-level apartment building in an easily accessible and constantly improving suburb, at a price that will bolster our medium-cost development pipeline that is affordable to the wider market,” Finbar managing  director Darren Pateman said in a statement.

The acquisition follows last week’s announcement that Finbar had been granted planning approval for a $188 million, 347-apartment project located at the former Ross’s Auctions site near Maylands train station.

The Maylands project, Unison, will be developed in a joint venture with Ventrade Australia.

It is expected that marketing of the Unison project will kick off in June.

The company said it had sold $108 million worth of apartments at Au to date.

Marketing is also under way for its Norwood complex in East Perth, as well as Arbor North in Rivervale, while sales are set to launch in July for the $220 million Concerto apartments in East Perth.

Collectively, Finbar projects either under construction or about to enter marketing will deliver more than 900 apartments to the Perth market.