Finbar on the lookout for hotel operator

Finbar Group is inviting expressions of interest from hotel operators for a proposed 18-storey hotel located on Adelaide Terrace, a site previously home to the ABC studios. 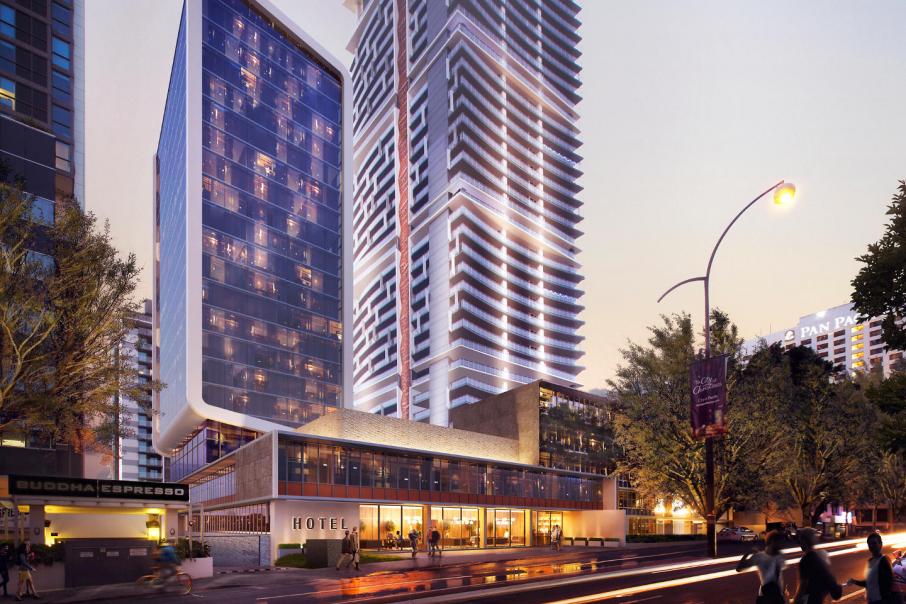 Finbar Group is inviting expressions of interest from hotel operators for a proposed 18-storey hotel located on Adelaide Terrace, a site previously home to the ABC studios.

If granted approval, Finbar’s hotel will follow several hotel projects currently under construction in central Perth, including: two DoubleTree by Hilton hotels (one in Barrack Square, the other in Northbridge); the QT Hotel Perth on Barrack Street; The Ritz Carlton at Elizabeth Quay; the Westin Hotel at the eastern end of the CBD; and the Mantra Hotel on Hay Street.

The site is heritage-listed and was occupied by ABC from the 1960s until 2005, when it shifted to its current headquarters on Fielder Street in East Perth.

The former ABC studios were constructed in the late 1950s and Finbar said the heritage fabric would be retained, including a restored mural by local artist Robert Juniper that currently frames the entrance on Adelaide Terrace and the Basil Kirke Studio (named after a former ABC manager), well-known for recording the Oscar-winning soundtrack for the film Out of Africa.

Finbar managing director Darren Pateman said the development presented a rare opportunity for a hotel operator to secure a position in a brand new large-scale hotel with an outstanding CBD fringe location.

“Its unique heritage and design characteristics will be unlike anything else available in Perth with the proposal looking to centre activity on the unique Basil Kirke Studio, which used to be the ‘home’ of the WA Symphony Orchestra,” he said.

Perth-based heritage architects, Palassis Architects, has been appointed to the project with a brief to provide a strong design element to the new structure and innovative utilisation of the heritage spaces.

Finbar said the appointed hotel operator would have the ability to provide input into the design to achieve an individual and distinctive experience including specifications that were a function of a selected brand.

The deadline for expressions of interest submissions is April 26 2018, to be directed to Finbar general manager project coordination Scott Cameron, with preparations for lodging a development application to occur about four weeks from the closure date of the tender.

The expression of interest process allows Finbar and Ventrade Australia to select a hotel operator at its sole discretion.

Finbar also stated that the group and its long-term joint venture partner were yet to finalise their position on the ultimate ownership structure, including their future intentions to either retain or dispose of the asset.

Finbar shares were unchanged at 0.97 cents per share at the time of writing.