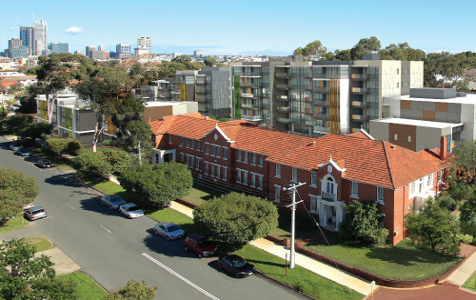 Kingston International College will move its English language and vocational school to Highgate early next month, to a heritage-listed building it bought from apartment developer Finbar Group for $3.5 million.

The building, located on Harold Street, was the only part of the former St Marks College that was retained through Finbar's $66 million redevelopment of the site into a 130-apartment project.

The sale was brokered off-market by Colliers International.

Finbar bought the site from the Japan-based GEOS group on a lease back arrangement in 2007, for $11.3 million.

GEOS slipped into administration in 2010, leading to the closure of the St Marks College and subsequently Finbar's redevelopment plan.

Kingston currently operates out of a building on Francis Street, and will move to its new premises next month.

"The buyer started searching for a new home well before the lease for their existing premises was due to expire," Mr Lawrence said.

"They looked at a number of properties, and their patience and unwillingness to compromise has rewarded them with a beautiful character building that is well-suited to their needs.

"The transaction was well-timed from both the buyer and seller's point of view, and it is fair to say both are very happy with the outcome."