Perth’s largest apartment developer, Finbar Group, has applied to build a $350 million, triple-tower development at Canning Bridge, with the three-stage project to comprise up to 452 apartments. 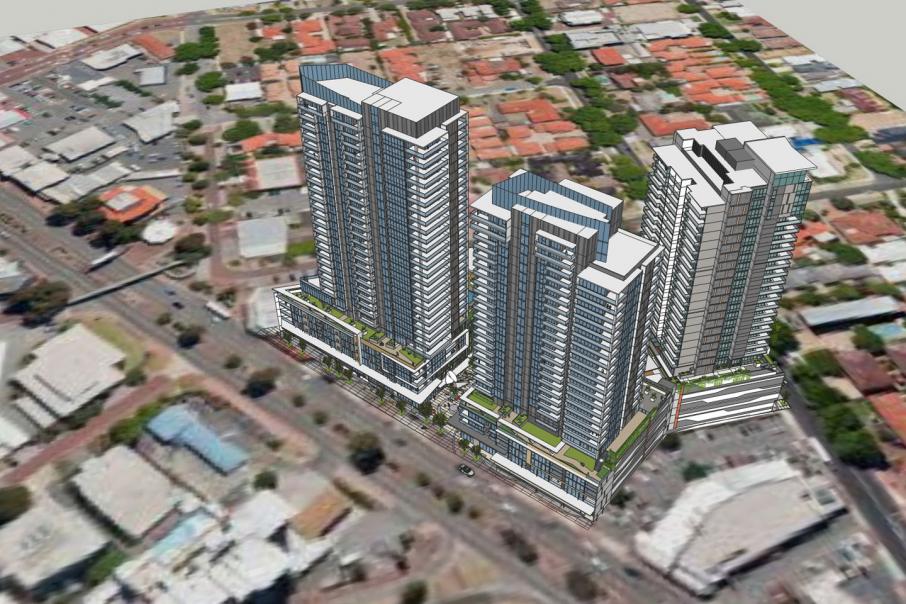 Perth’s largest apartment developer, Finbar Group, has applied to build a $350 million, triple-tower development at Canning Bridge, with the three-stage project to comprise up to 452 apartments.

One of the towers is proposed to be 30 storeys, while the other two will be capped at 26 storeys, according to development assessment panel documents.

Finbar’s proposal comprises three stages, with the first 30-level tower to comprise 179 one-, two- and three-bedroom apartments, and 294 square metres of commercial space, across three tenancies on the ground floor.

The second stage will provide a further 151 apartments, while the third stage will be 122 units.

In total, there has been 865sqm of commercial space proposed, including up to five cafes, restaurants or small bars, three office tenancies and a pharmacy.

Each of the proposed buildings will also contribute further amenity to the area, with swimming pools, lounges and dining rooms, meeting rooms, gymnasiums and other communal facilities incorporated at podium level.

A public piazza will also be constructed at the Canning Highway end of the development.

Finbar Group’s proposal will be evaluated by the Metropolitan Central DAP in a week’s time, while City of Melville planning officers have recommended approval.

However, a public consultation process unearthed 45 submissions opposing the development, with the building’s height, traffic impacts, shadows from the towers, and insufficient car parking among the concerns raised.

Finbar expects the first stage to be completed by the 2020 financial year, pending relevant approvals and a successful marketing campaign.

The plot on which the project is proposed is owned by Monadelphous Group chairman John Rubino, who entered into a development agreement with Finbar in August last year. The proposed development is at the centre of the City of Melville's Canning Bridge Activity Centre. Image: Finbar Group

The project is the third high-rise apartment development to be proposed around Canning Bridge, joining Norup + Wilson’s The Precinct, and Stirling Capital’s Cirque.

The City of Melville adopted new planning guidelines in 2015 for the Canning Bridge area, with flexible guidelines allowing for almost unlimited heights to be constructed.

Norup + Wilson’s plan comprises a 22-level apartment building containing 199 dwellings, and a ground floor entertainment hub, with up to 10 restaurant or cafe tenancies included in the plans.

Cirque comprises two separate towers, one at 111 apartments, and the second to comprise 121 dwellings.