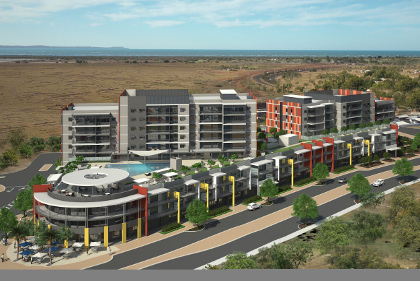 An artist's impression of the completed Pelago East and West developments.

Apartment developer Finbar has announced the release of the second stage of its Karratha high-rise residential project, Pelago.

Nearly 35 per cent of the project is already pre-sold.

“Through a very positive relationship between the private and public sector, the Karratha CBD redevelopment is being spearheaded and we are excited to be a part of this important stage for the Pilbara area,” Mr Pateman said.

The first stage of the complex, Pelago West, is currently 85 per cent pre-sold or leased, Mr Pateman said.

At close of trade today, Finbar stocks were down 1 per cent, trading at $1.04.