Finbar gets nod for Belmont apartments

Apartment developer Finbar Group has been given the go-ahead for a $77 million, 194-dwelling project in Belmont, with construction set to begin next year. 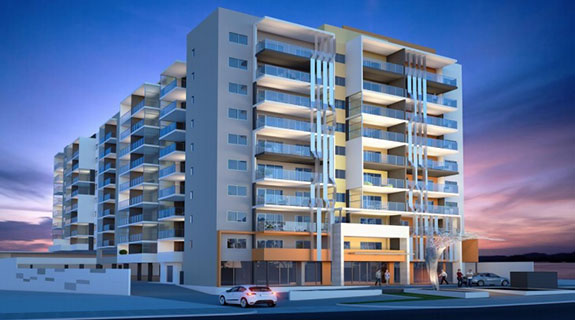 An artist's impression of Finbar's Chase Apartments project in Belmont.

Apartment developer Finbar Group has been given the go-ahead for a $77 million, 194-dwelling project in Belmont, with construction set to begin next year.

Finbar received approval from the Metro Central Joint Development Assessment Panel and the City of Belmont for its 10-storey apartment project at 239 Great Eastern Highway, which was formerly the Comfort Hostel.

The project will comprise 194 one and two-bedroom apartments along with amenities including a pool, gymnasium, residents’ lounge, games room and a sauna.

It will be named Chase Apartments.

The land, located near Hardey Road and the Ascot Racecourse, was purchased by Finbar in 2014 for $6.4 million.

Finbar managing director Darren Pateman said the main driver for the acquisition was to offer a high-rise product that was more affordable to the wider market.

A market launch for the project is expected to take place during the first half of the year, with construction forecast to begin in 2017.