Finbar Group has completed its $100.3 million Spring View Towers project in Rivervale, with $96.6 million already secured from the sale of all but seven of the 188 apartments. 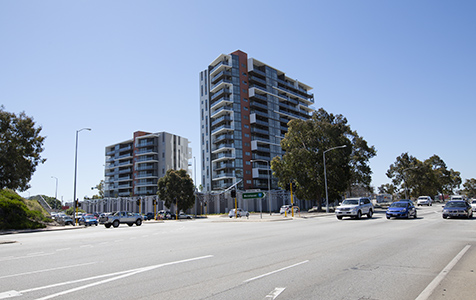 Finbar Group has completed its $100.3 million Spring View Towers project in Rivervale, with $96.6 million already secured from the sale of all but seven of the 188 apartments.

Finbar said it expected settlements to start later in the month, with revenue from pre-sales to be a large contributor to its first 2015 financial year earnings.

Spring View Towers, which is the first development to be completed within LandCorp and the City of Belmont’s Springs Rivervale redevelopment project, consists of one, two and three-bedroom residential apartments in two nine and 16-storey buildings, along with an amenities level.

It was developed under a joint venture arrangement with Wembley Lakes Estates Two.

“We embraced the opportunity to be a part of the state government’s urban infill aims as well as working with the City of Belmont in bringing to realisation a transformative development.”

The Spring View Towers is located at 3 Homelea Court in Rivervale, bordered by Great Eastern Highway and the Graham Farmer Freeway, and offers river and city views.

The project was awarded the City of Belmont’s 2014 opportunity award in recognition for its high-quality development.

In September, it received approval for a joint venture residential development of the former Hisco 4,000 square metre site at 172 Railway Parade in West Leederville.