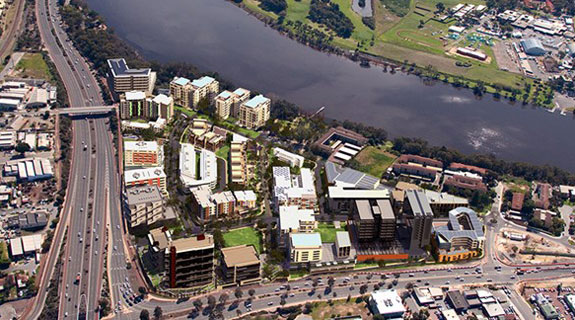 An artist's impression of The Springs, once fully developed. Image: LandCorp

Two days after receiving approval to launch its next project at The Springs in Rivervale, apartment developer Finbar Group has bought four vacant plots in the area which it plans to amalgamate and build a 10-storey apartment building.

Still in its early stages, Finbar said the building would likely contain 185 apartments and have an end value of $83 million.

Finbar paid $5.15 million for the land, with the transactions expected to settle by the end of next month.

The land is located on the corners of Rowe Avenue and Homelea Court, between Finbar’s Spring View Towers and Arbor North projects.

“These additional acquisitions within The Springs precinct increases our total past and future Springs apartments supply to 842 apartments, 500 of which we plan to deliver over the next four years,” managing director Darren Pateman said.

“Once amalgamated and developed, the planned project will also provide for more cohesive design, benefitting the precinct as a whole, rather than see the four individual sites developed with less efficient and disjointed projects.”

The acquisitions follow Finbar receiving development approval earlier this week to launch a 183-apartment development on the corners of Brighton Road, Rowe Avenue and Lauterbach Way, also at The Springs.

That project is expected to become a significant entry statement for The Springs, with a big focus on providing retail and hospitality amenity.